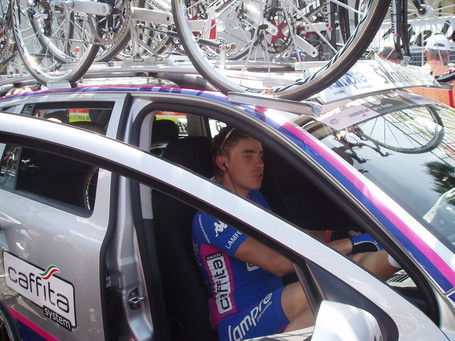 With his third victory at the Giro di Lombardia this weekend, Damiano Cunego adds another monument to his classics palmarès and joins a small number of riders who've won Le Foglie Morte three times. The most recent three-time winner is Sean Kelly. Fausto Coppi holds the record with five victories. Gazzetta dello Sport, among others, proved quick to declare Cunego the "next Bettini." After his escape on the descent off the Civiglio, "no one could bring back the ex-Little Prince, who with this success reinforces the sensation that the next Bettini appears in him," wrote Gazzetta.

Cunego quickly disavowed the characterization. "I am not going to define myself as the new Bettini," he said in his post-race press conference. But 'miano, look at the races you have won lately: Amstel Gold, 2nd at Liège-Bastogne-Liège, 2nd at the World Championship road race, and this weekend's win at Lombardia. It is not too hard to imagine Cunego unwinding a long string of classics wins in the coming seasons. Certainly, he has the characteristics: a fast finish, an ability to climb, and an increasingly sophisticated tactical saavy. Squint your eyes at the screen, and almost you see Bettini. With il Grillo's recent retirement, it's hardly a surprise to see the Italian press look for his replacement. Little wonder that they've hit on Cunego as the obvious choice, especially since Bettini himself called Cunego his successor.

But Cunego has been down this road before, the road where the press and punditry heap expectations on his back, and declare him the new this or that. And it's clear that he remains determined to chart his own course. At his press conference he reaffirmed that the grand tours remain an objective, and he announced his intention to ride next year's centenary Giro. He recently told a group of school kids that his idol growing up was Marco Pantani and that his favorite race is the Giro d'Italia. This does not exactly sound like the words of a future classics rider in the mold of Bettini. (Clicky the link for a cutey pic of Cunego and the kids, who are very nearly taller than he is.)

After the July Disaster, it would be easy to dismiss Cunego's chances. Not so fast, he says. "I under-estimated certain things for the Tour, this year," he said. Indeed. The long cronos of the Tour de France seem unlikely to do the Italian any favors in his career, the 2004 Giro win feels a long time past, and he has looked like more and more of a classics rider lately. As specialization has come to rule the roads, the idea of riding well from February to October in all sorts of races has fallen aside. A rider does one thing or the other. Cunego is Bettini. Or, he is Simoni {chortle}. He can not be both.

But Cunego already is both. In September, he turned 27. Already, he has surpassed Bettini's successes at Lombardia. He lacks a World Championship, though he's come close, and he lacks the towering monument, Liège, where again, he's come close. At the same time, he has won the Giro d'Italia and the young rider's competition at the Tour de France. In 2004, at age 23, he won the Giro d'Italia and the Giro di Lombardia, becoming the first rider since Laurent Jalabert to win a grand tour and a monument in a single season. Sean Kelly also counts this accomplishment among his successes.

A look at the results for the 2005 and 2006 Giro suggests that 2004 might not be as long ago as it seems. In 2006, Damiano Cunego finished fourth. Who finished ahead of him? Ivan Basso, José Enrique Gutierrez Cataluña, and Gilberto Simoni. In 2007, the Varesino finished fifth behind Danilo Diluca, Andy Schleck, Eddy Mazzoleni, and Gilberto Simoni. The Giro doesn't do astericks, but it's hard to see much to criticize about finishing behind Basso and Gutierrez in the Year of el Puerto. Cunego is better than Bettini. If his career follows its current track, he shows every sign of evolving into a champion from another time, a champion who wins throughout the year, who combines stage race success with big one day wins.

Look behind the wheel of the Lampre car. There sits a far more likely model for Cunego than the now-retired Bettini. Guiseppe Saronni won the Giro d'Italia, won Liège-Bastogne-Liège, won the World Championship, won Milano-San Remo. As a rider Saronni was tactically saavy, a trait he appears increasingly to pass on to his young protegé. What made this year's Giro di Lombardia interesting was not that Damiano Cunego won it, but rather how he went about it. How did you expect him to win? No doubt the way he usually does, on the sprint from a gruppo ristretto (not to be confused with an espresso ristretto, which is a different thing altogether.)

But it didn't happen that way. Cunego played the waiting game letting his team do the work, as one after another, some big names tried their chances. Then, he attacked on the descent off the Civiglio. A crafty move: The trees hid his gap from not only the tifosi, but also the DS's in the cars of the opposing teams. And few have the bike handling to match a move like this. Was I the only one who immediately thought that Cunego might someday similarly win Milano-San Remo? At the base of the Civiglio, he held a gap of 20 seconds. The chase group, powered largely by Samuel Sanchez, brought Cunego back to within 10 seconds, as he rode with one ear turned behind him, hands on the hoods, half-waiting for the catch that never came. (Saronni with his formidable sprint would likely have waited.) The chase fizzled, and with 20 seconds in hand at the base of San Fermo, Cunego committed fully. It was not a win for the ages, as the legendary victories come against more resistance, with more friction, and more genius. But it showed an increasingly smart rider growing into his talent, gaining in range and experience.

Cunego is determined to race from February to October, he said, and determined to win both grand tours and the classics. The Tour will likely elude him, but the Giro remains within reach. Not in this lifetime will he win Paris-Roubaix, and he'd be foolish to try. Flanders would be difficult, but perhaps not entirely out of the question. Should everyone show up healthy and fit, one of the great battles of next season will take place on the road to Ans. A head-on clash between a maturing Cunego and a fast-finishing Valverde could indeed be a monument for the ages.

But all that is for the future. For now it's time for winter, when all good bike racers go hibernate and eat sweets and pizza (Cunego admitted to a weakness to both in his classroom visit), and all good tifosi practice their trivia and focus on winter projects. Among the winter projects that deserve priority is a new nickname for Cunego. Really, at age 27, with a grand tour and three monuments to his credit, he deserves better than the "Little Prince."