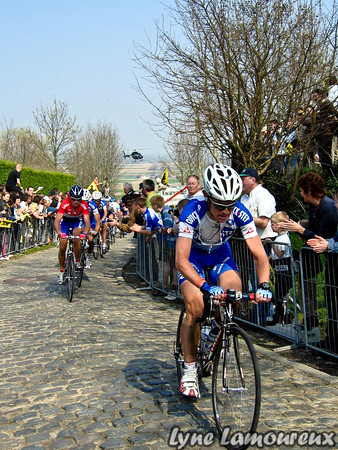 Fabian Cancellara has set for his next season's goal a win at the Ronde van Vlaanderen. Though certainly he would not mind a repeat of his wins at Paris-Roubaix or Milano-San Remo, he said that he likes to find new goals for each successive season. "I sort of feel like if I've won a race I'll tick it off my mental list and aim for something else. That doesn't mean I don't want to win the big races more than once but I try to aim for new things all the time," he explained, on the CSC-Saxo Bank website. For the Ronde, he plans to lose "a small amount of weight," in the hope that it will ease his trip over the cobbles.

Cancellara's highest finish so far came in 2006, when he finished 6th. Since then, he has faired less well. In 2007, he finished 53rd, after a long breakaway attempt that came too far from the finish to succeed. He called it a learning experience. This season, he finished 23rd. Though Cancellara made it to the Mur de Grammont with the main field, he failed to make the selection on the crucial climb. Devolder had already made his racing-winning escape, in any case. Certainly, the big Swiss has the power for Flanders. But he will need a combination of smart tactics and improved climbing to take the win.

Over the long term, Cancellara would like to collect victories in all five monuments: Milano-San Remo, Paris-Roubaix, Ronde van Vlaanderen, Liège-Bastogne-Liège, and Giro di Lombardia. He is quick to admit that Liège and Lombardia present difficulties unlike those of the cobbled classics or San Remo. But Cance also pointed to his recent success on the hilly course at the Beijing Olympics and in the hills at Tirreno-Adriatico as signs that he could find succeess in the hillier classics. "I don't think it's unrealistic that I might be able to win them all at some point," he concluded.

A win at next year's Ronde would give him three of the five, but the remaining two will not come easily. Cancellara has shown an ability to climb, for sure, but out-climbing and out-finishing riders like Valverde and Cunego will be no easy task, even for a rider of his talent. With its descending finish, Lombardia may well be within reach, but the steep final kilometers at Liège have tended to favor lighter, smaller riders. Likewise for the long haul up La Redoute where the first major selection of the race typically takes place. It's hard to imagine Cancellara holding the wheels of the likes of Andy Schleck and Alejandro Valverde on that sort of terrain. But as one of the biggest talents in the sport, Cancellara has already taught us to expect surprises.

In the same interview, Cancellara dismissed the press speculation that he might make a serious run at the Tour de France. To be sure, it would be a dream come true to wear yellow on the Champs Élysées, he explained. But there are dreams and then, there is reality. "I said a few years back that winning the Tour would be a dream come true for me. But I also sometimes dream of owning a small island in the Pacific and taking it easy. There's a world of difference from having dreams to setting yourself realistic goals to aim for," as he put it. The Tour might one day figure among those aims, but not for now. Next season will be all about the Ronde.

After a brief vacation with his family, Cance recently received the Best International Rider award from the Belgian press.