Share All sharing options for: Cafe Bookshelf: A Bloody Mess

Title: Bad Blood: the Secret Life of the Tour de France
Author: Jeremy Whittle
Publisher: Yellow Jersey Press (UK)
Pages: 234
Order: HERE
What is it? The personal journey of a British cycling journalist through the sport's moral sewer.
Strengths: Whittle's front-line view of the sport's biggest stories, and the resulting soul-searching. Very well-written.
Weaknesses: Familiarity with the basic subject matter breeds contempt.
Rating: ★★★ (3 of 5) Maybe 3.5, if I could find a half-star icon.

Time to get back to the previews, and today it's another book by a well-known British journalist. This time the subject is Jeremy Whittle's first-person chronicling of the sport's descent into the current doping morass it still struggles to extract itself from. Whittle details his linear journey from entry-level biker to a journalist on the front lines, where he is ultimately drawn into the divide between dopers and clean riders, and forced to choose sides over drugs. 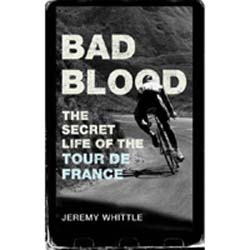 Whittle comes to cycling via a well-worn path: after wrecking his knee (in soccer) and being put on a bike for exercise, during which he happens to catch the Tour de France on TV. Eventually Whittle gets heavily into riding himself, along with a flatmate who nourishes Whittle's incipient interest. Before long, he takes a staff reporter job with Procycling Magazine, and starts interacting very closely with the sport, just as the EPO era is kicking into high gear.

From here, Whittle walks the reader from one drug scandal to the next. Festina, Ferrari, Pantani, Riis, Millar, etc. The bulk of the book is short chapters on each major, known development in the drug wars, often from a first-hand view, occasionally detouring to interactions with anti-doping crusaders. Easily the low point of the book is the need to rehash this stuff. Of course, that's the hardened fan's perspective; someone new to the sport might actually appreciate this.

Anyway, the anecdotes are not the point of the book; the author's experience is. This is actually what makes Bad Blood worth staying with, even through another retelling of the Landis Affair. Whittle seems like a guy doing his job, interviewing the famous guys and attending the big races. As doping becomes a story, he covers it: Walsh, Willy Voet, the Lance rumors, etc. As a result, he finds himself drifting outside of the in-club for violating the sport's omerta. And Lance Armstrong seems to be the doorman.

Eerily parallel to this news is the rise of Lance Armstrong, a rider Whittle gets to know pretty well as he chronicles Lance's exploits. He meets a young Lance, shortly before his world championship, and visits an ailing Lance in Texas during his recovery from his cancer surgery and chemo treatments. Despite this early "bond," Whittle loses his connection to Lance as the star disappears behind a curtain of bodyguards, and into his late-career antics of suspicion and isolation.

Meanwhile, Whittle is being drawn into the orbit of the crusaders, or "trolls" in Lance-speak. Perhaps because the charge is led by fellow British sportswriters whom Whittle naturally wouldn't casually dismiss, Whittle focuses on the various accusations against Armstrong and the ugly battle brewing. The tipping point for Whittle is the incident in the 2005 Tour where Armstrong personally chases down Filippo Simeoni in retaliation for Simeoni's having accused Dr. Michele Ferrari for helping riders dope. By this point Whittle is openly associating with the dissenters, like Walsh and Kimmage, and ensuring his own marginalization, just like Simeoni did for speaking out.

It's disheartening, but at a meeting of dissenters in France, the author realizes he has seen too much to follow along mutely and enjoy his old comfortable stature:

I tell myself that I love cycling -- I still love cycling -- but, most of all, I suddenly realize, in the dim light of Laval's Foyer Culturel as Laurent Roux bows his head and confesses his sins and an unexpected wave of sadness washes over me, I hate doping and I hate the misery that goes with it.

The book is one any serious fan can relate to, and underscores Whittle's true identity as one of us. Maybe the message for us is, we can be ostracized too if  we violate the omerta; maybe we already have. It's a dark, dismal story, one whose relevance is hopefully fading quickly in the wake of a new era in Cycling. But as daily headlines remind us, real change isn't coming as quickly as it might appear, and getting the riders to open up to the problem, to own up to fans and critics, is still a major work in progress.

OK, more reviews are in the pipeline. Next up: Joe Parkin's Dog in a Hat. So far, so good.