Notwithstanding the demise of the venerable Zuri-Metzgete, a spate of Italian racing around Paris-Tours makes for a fast and furious finish to the season. We tend to celebrate the spring classics every step of the way -- for reasons I will never, ever waver on -- but there's a pretty sizeable community of big-time riders still bringing it in October every year. So, with that in mind, we put three of these races on the VDS calendar: Lombardia, Paris-Tours, and Saturday's Giro dell'Emilia.

The Giro dell'Emilia is the centerpiece of a trio of races in Emilia and Romagna which serve as a great warmup for the monumental Giro di Lombardia. Last Saturday, Mykhaylo Khalilov won the Memorial Cimurri from a breakaway group that included Giovanni Visconti and Danilo DiLuca. This weekend, after the Emilia tour, the region hosts the G.P. Beghelli, won last year by Damiano Cunego as a preview of his subsequent Lombardia triumph.

And that's just Emilia; not far off in Genoa, another pretty classy group will contest the Coppa Sabatini, won last year by Visconti over Frank Schleck. Tomorrow the hills of Rome play host to the Giro del Lazio, an equally fine race (despite sharing a name with the world's worst soccer team), last won by Gabriele Bosisio. And all of this is without the Monte Paschi Eroica, relocated to spring.

Onto the flip: the Giro dell'Emilia... nel detagglio!

The major difference between the Belgian spring and the Italian fall is the lack of repetition in the latter. While the smaller Belgian classics draw out big names by including climbs from the Ronde van Vlaanderen, the Italian fall semi-classics are all unique, stand-alone events. To wit: the Giro dell'Emilia is a year away from celebrating its centenary; the Lazio event started in 1933 (please don't tell me this was il Duce's idea); Coppa Sabatini dates back to 1952; while the Beghelli and Cimurri events are relative newcomers. Anyway, they're all tough enough to draw out portions of the upcoming Lombardia event (the Cimurri runs four circuits over a tough double climb; Beghelli ends with eight circuits of a single climb), and the Giro dell'Emilia is the king of the warmups.

The honor roll is a heavily Italian-accented, climby who's who list: Merckx won here, as did Coppi, Moser, de Vlaeminck, Bartali, and Girardegno. The last decade (such as it was) of winners reads Celestino, Boogerd, Simoni, Ullrich, Bartoli, Jose Ivan Gutierrez, Basso, Simoni again, Rebellin and Schleck. As for why the race attracts and rewards the luminaries (and scores a 1.HC rating on the Europe calendar), well, despite my war against profiles, I feel compelled to drop one in here: 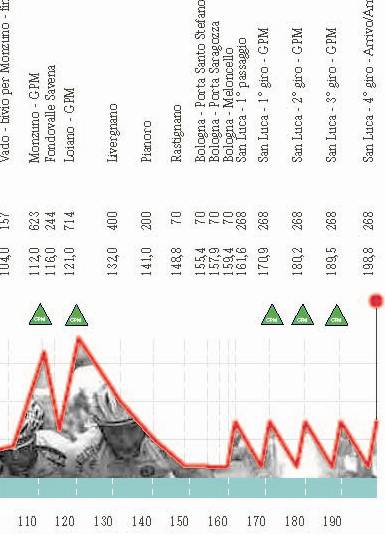 I trimmed the first 100 km from Modena to the outskirts of Bologna, which appear to be board flat. From there, the race ascends from 157 meters to 623 (the Monzuno), then drops down to 244m, then right up the Loiano to 714. Roughly 1100 meters of climbing, a/k/a 3600 vertical feet of climbing, in the space of 17km. That, my friends, is altitude change we can believe in. The Loiano was brought back last year after being excluded for a couple decades, restoring the scene over which Merckx and Motta did battle. But the signature climb is the finale: five courses of the San Luca climb in Bologna. It's a 2km rise that's not quite as vertical as the profile suggests; it's only an average 10% grade with an 18% max. The race finishes on top. The gravity-challenged need not apply.

Official startlists are still filling out, but a few samples: Garzelli (feeling vengeful after missing the worlds?), Rebellin, Bertagnolli, Pellizotti, DiLuca, Bosisio, and every climbing Italian you can think of. Also, Gesink, Evans, Kolobnev, Pfannberger, Brajkovic and Horner, for starters. Lampre haven't listed their team but you can expect to see Cunego on the list... and maybe Ballan in his new colors. And lo, a Filippo Simeoni sighting. Hopefully there'll be live video someplace, this should be an epic battle.