Share All sharing options for: Cafe Bookshelf: A Regular Joe

Title: A Dog in a Hat: An American Bike Racer's Story of Mud, Drugs, Blood, Betrayal, and Beauty in Belgium

What is it? The autobiography of a young American racer trying to catch on with the LeMond-era European Peloton.

The full story of American Cycling in Europe is well known, right? In 1983, Greg LeMond moved to France, and in short order won two world titles and three Tours de France. The 7-Eleven Team also dabbled in Europe, bagging a Giro d'Italia through Andy Hampsten. Then Lance Armstrong arrived and taught the world how to ride a bike all over again. And... that's it. Right?

OK, it's no longer a big secret that the US has, in recent times, sent guys to Europe to take on roles in the Peloton besides grand tour winner. Today's pro peloton includes two teams officially listed as "American," including the second-highest-scoring outfit in Cycling (Columbia), and US citizens can be seen carrying water, leading out sprints, and occasionally controlling the front of the race across the continent. Not to mention hammering out some fine time trial results. 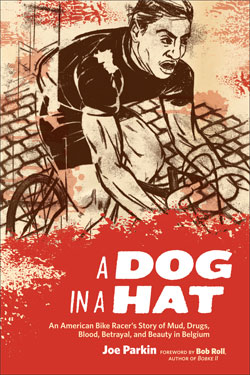 But the complete story contains some relatively unknown, unheralded chapters. Not many cycling fans here knew of "Jacques" Boyer, the first American to complete the Tour de France in 1981, until Lance Armstrong became famous enough for people in the States to start contemplating US history. Since Boyer moved to France in 1973, increasing numbers of Americans have been exporting their skills to Europe in the hopes of catching on the pioneer way, like Boyer did: without the benefit of an American team or any other institutional advantages. Joe Parkin is one of those guys.

Parkin moved to Belgium in 1986, on the advice of 7-Eleven masher Bob Roll, fresh off his team's inaugural foray into the Giro d'Italia. Then an amateur ace, Parkin was quickly swayed from a life of American success for the real thing, the desperately unglorious life of trying to make it in Belgium as a new pro. Within a short time he was trying Kermis racing, then being unceremoniously tossed into the Classics, then crashing out of Liege-Bastogne-Liege. For parts of six seasons, Parkin shuffled around the scene, sometimes in the major races, other times on the B-Squad and chasing results a little further from the spotlight.

Parkin endured the typical isolation that all young American riders complained of, at least until enough of them made it to Europe and established a small colony in Girona, Spain. More significantly (from my reading, at least), Parkin made an actual place for himself before giving up, making it as a stage-hunting climber with ADR's B-team (the same year the A unit was, um, sorta helping LeMond win the '89 Tour). Parkin stuck around two more years as ADR became Tulip, developing a place as a reliable domestique on a top-level team, before being unceremoniously dumped prior to 1992 in a team contraction.

A Dog in a Hat is the first book I can remember by an American pro embedded deeply into European racing, whose experience didn't end in individual or team glory. We've heard the LeMond and Armstrong stories, and we've read fun books by Motorola or Postal guys like Roll or Michael Barry. Parkin is different, he went native. And he did it in an era when Americans were still exotic creatures, and not in a good way.

This unglamorized insider's view is what makes the book well worth reading. Parkin not only opens up Flemish cycling a bit more, he shows you life on the edge of the peloton. We know the great champions' stories, but Parkin's experience -- ambitious kid, stage hunter, domestique -- is far more common and illustrative of what a "pro cyclist" really is. Chances for glory flash before him and fade away. Race schedules are determined by where the sponsor's label is needed, not by what might give you a chance to do well. Time and again Parkin's career path is haphazardly determined for him, by managers and events beyond his control. The whole concept of Parkin the skinny climber, hardening into a Flemish-style hard man, demonstrates the sport's blue-collar nature. For every patron, there are 200 other guys with precious little say, just chasing the next ride.

Parkin has a great story to tell, and what he tells of it is nicely done, having kept me more or less glued to the narrative til the last page. My only criticism is that it could be twice as long and not get dull. I wonder where more of the details went -- into the ether, after 15 years? or perhaps Parkin, having lived the hard life, didn't find them as interesting as outsiders like myself might? or maybe his editor couldn't believe there'd be people who want to know more about the inside of the bar where his official fan club held court? But if the book's biggest problem is that the truly obsessed fans of Flemish cycling might want more of it, then Parkin has probably done his job.