Share All sharing options for: Theo Bos Hits the Road 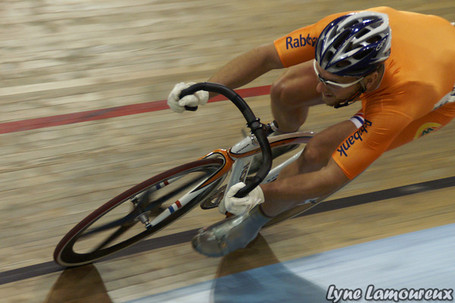 Track sprinter Theo Bos will ride the road for Rabobank Continental beginning next season. The offer from Rabobank came at a good moment, says Bos. The Beijing Olympics proved disappointing, as the talented sprint specialist returned home empty-handed. Since he began racing at the elite level in 2004, Bos has won world championship titles in the sprint (twice), the kilo, and the kierin, and boasts numberous world cup results. In 2004, he took silver in the sprint at the Athens Olympics. In comparison to past years, this season was not an especially successful one.

The Cervélo TestTeam was also reportedly interested in signing the 25 year old Dutchman. Rabobank offered a longer-term commitment to Bos than Cervélo, and he likely wanted to stay closer to home. The contract with Rabobank runs two years, and Bos will join the Rabobank Pro Tour team in the second year. The decision to take on a full-time road commitment next season means that Bos will probably not contest the London Olympics in 2012.

The transition from track to road does not always come easy. For the endurance specialists, such as pursuiters, the road comes relatively easily, because most riders in these disciplines put in significant time on the road. For the sprint specialists, it can be more difficult. Sprinting from a standing start on the track is a far different affair than sprinting after 200 kilometers of racing. Track sprinters also carry considerably more muscle mass than the average road sprinter. Forget about climbing.

For American sprint specialist Marty Nothstein, for example, the results on the road came slowly, and mostly in short criterium events. Nothstein's road adventures came at the end of his lengthy track career. By contrast, Bos is currently 25 years old, and has time to develop the endurance necessary for the road. Reportedly, Bos has already begun the necessary transition work, but it may be a season or two before his talent really shines on the road. Should all go according to plan, though, we may yet have a talented new sprinter to watch.

Photo copyright Lyne Lamoureux, used with permission. Full disclosure: The rider in that photo is not Bos, but we have do have permission to use it. Win some, lose some.