Share All sharing options for: A Giro d'Italia History Moment

Watching the 2005 Giro d'Italia on the trainer last night was a nice little reminder of how wonderful this race is. With the iPod blocking out Phil Liggett, I could pedal away as the riders climbed Zoldo Alto and the Finistere. In my head I could hear the RAI announcers lamenting "un crampo per Daneeeelo DiLooooca...". Not the worst way to spend a sweaty workout.

As we've discussed recently, the 2009 Giro d'Italia will be unveiling a blockbuster route next month. One of the themes will be the 100th anniversary celebration, and the latest rumorage from all sources suggests that the race will visit all eight of the original host towns. We all remember the Tour de France doing exactly that in its centenary race in 2003, when the race began and ended in Paris, with stops in original cities Lyon, Marseilles, Toulouse, Bordeaux and Nantes, places the Tour usually avoids.

Thanks to Wikimedia, we have at least a rudimentary map of the 1909 Giro d'Italia: 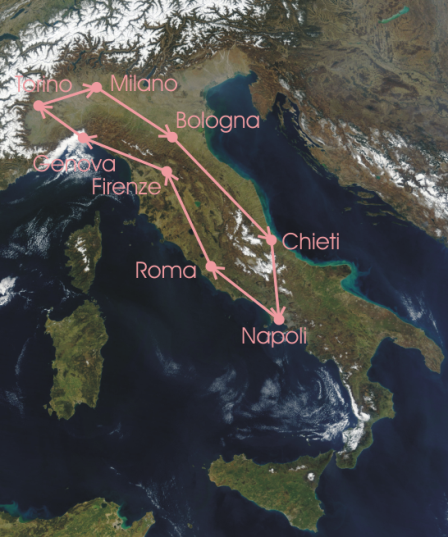 Started and ended in Milan. No transfers. Stages ran as follows:

Now on to the rumored 2009 edition. Gavia's earlier post included the La Stampa poster of the purported race. Steephill.TV provides a downloaded version: 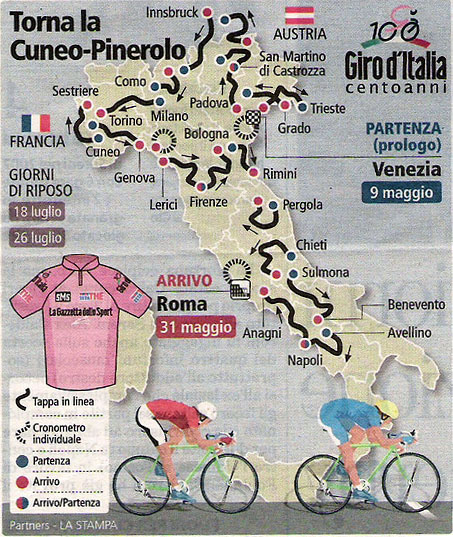 The 2009 race looks like it will pay homage to 1909 by including the original eight cities -- like the Tour, places they rarely visit, presumably for logistical reasons. But that's really it; the 2009 version doesn't look like it will trace the original route as much as the Centenary Tour did. It doesn't take the original eight cities in order; just squeezes them in along the way. However, this isn't RCS diminishing history; more like the opposite. I look for the race to celebrate the history of several other Giri in the process. My Giro history is limited to the last 20 years (if that) and 1949, so I'm sure to be missing much of the grandeur of this course, but from 1949 alone we can see Cuneo, Pinerolo and Sestriere. Also, the ride into Trieste is another amazing moment from the Buzzati book, to be recalled next May. In typical fashion, while the 2003 Tour celebrated its original route from 100 years ago, I expect the Giro to try to celebrate all 100 years of its history at once.