Share All sharing options for: The Worldwide Loser [+ update]

Here's a screenshot from the self-proclaimed "Worldwide Leader in Sports" today: 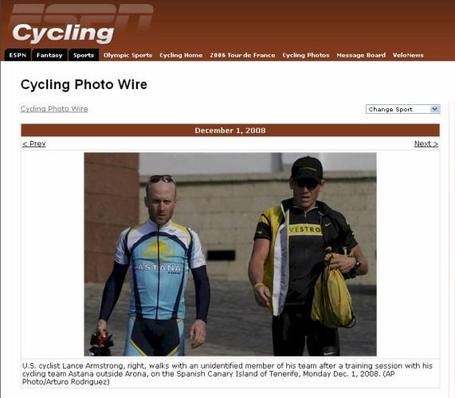 U.S. cyclist Lance Armstrong, right, walks with an unidentified member of his team after a training session...

"Unidentified"?!? Does this help? Still drawing a blank? How about this? Still nothing?

This is inexcusable. It's Levi Fucking Leipheimer, the first, second and only American to ever ascend the podium of the Vuelta a Espana. The third fourth American to ever stand on the Podium in Paris (officially). The present Olympic Bronze medalist. The only American to ever win the Deutschland Tour. The twice-winner of the Tour of California. Maybe the caption was written by some random service that auto-loads on the ESPN website, but I demand a correction. Also, if it sounds like I'm overreacting, 1) it's my job to overreact when Cycling gets dissed, and 2) it's ESPN's job to gain some basic awareness of America's greatest athletes.

Thank you for contacting us.

I reviewed the photo and see the source is AP (Associated Press). Because ESPN does not own the photo, we do not have the ability to update the photo or caption. Please contact the Associated Press with your request. I apologize for the inconvenience.