Cafe Bookshelf: The Art of the Cambio

Share All sharing options for: Cafe Bookshelf: The Art of the Cambio

What is it? The story of the Campagnolo S.r.L., world's most famous bicycle components company.

Strengths: History! Large format shows off these beautiful hunks of metal (or carbon).

Weaknesses: A tad fawning. Non-gear-lovers might want to stick to the pictures and sidebar anecdotes.

Ah, the corporate biography, truly one of the strangest subgenres of literature. A quick stroll through the corporate bio aisle of Amazon.com reveals some insight into what this breed of book is about. There's the strident, worship-or-die shelf, sporting such gems as Hard Drive: Bill Gates and the Making of the Microsoft Empire, or maybe Planet Google: One Company's Audacious Plan to Organize Everything We Know -- books written to let us know how lucky we are that such companies exist, lest we be ruled by miserable people like ourselves. Then there's that decaying smell emanating from the back corner... this comes from the transparent suck-up genre section, propping up books conceived in a CEO's superego and polished up in the marketing department, like The Partnership: The Making of Goldman Sachs (hardcover, $29.95 $19.95 $0.15) or Traditions Through the Trees: Weyerhaeuser's First 100 Years. Just when all appears dark, you notice a thin shaft of light shining on a hidden shelf, where you can find actual writing and enticing storytelling in books like Bacardi: The Long Fight for Cuba. Your takeaway lesson: don't assume all corporate bios are unmitigated literary disasters, in the same way you shouldn't assume all Illinois governors are corrupt. Literally speaking, at least, it's not true. 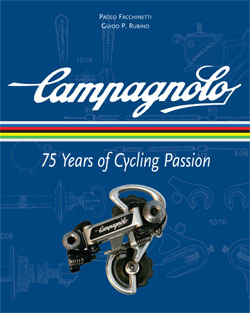 Campagnolo: 75 Years of Cycling Passion is the translated company history penned by Italian journalists Paolo Facchinetti and Guido Rubino. Fachinetti's life as a cyclo-journo dates back to the Anquetil era, and if you speak Italian, he's written books on Bartali, Bottecchia, and the tantalizingly-titled L'Apocalisse sul Bondone. Sign me up. Rubino is the techie and a relative youth, given to publishing manuals like Misure e Posizione sulla Bicicletta (Measures and positions on the bike). The historian and the wrench get together to hunt the ultimate prey: Campagnolo Brevetti Internazionale.

This book probably belongs on the shelf next to the Bacardi one, though at times you might feel tempted to consign it to the Google or Weyerhaeuser shelf. It's technical, and if you simply don't care about gear, you probably aren't even reading this review. It also does little to rub the gloss off of Campagnolo's sterling image. But if you're looking for a Christmas gift for your favorite cycling history buff/bike owner, this should go over rather well.

The book is a large-format history, heavier on text than you might expect, until splurging in the back on photos of gear through the years. The authors spend the first 80 pages detailing the linear history of the cambio, literally "exchange" or "exchanger," as it evolves from wrench-assisted wheel flips to the art form now dangling from the rear triangle of my Litespeed (full disclosure, yo). Tullio did not invent the derailleur -- the name itself should tell you it originated in France -- but he did invent the quick release skewer, which was a huge deal when you had gears on both sides of the hub and a change required flipping your rear wheel around. His quick release is essentially the same as the one still universally in use. He patented many advances in derailleur technology, including the parallelogram concept also still in use. As much as anything Campagnolo was famous for using high-quality materials, and his company's reputation for producing the best parts (not to mention priciest) is more or less intact.

You could learn all of this from Tullio's Wikipedia page, but the book adds a great deal of value to the story. First, the authors are pretty forthcoming about the competition. The first derailleurs came from France, and even Campagnolo's innovations were at best contemporaneous with other similar efforts, like the Montagnolo. But success is often a mix of innovating and knowing what to do with your ideas, and many of his would-be competitors in the idea world lacked Tullio's business savvy. Much of his story is a primer on how to innovate, manufacture, and get endorsements from the campionissimi to drive the sales home.

Like any good large-format title, it contains enough sidebars and anecdotes (and pure heft) to double as my techie brother's ideal coffee-table book. There are episodes of Campy products in service of the gods, like Fiorenzo Magni's heroic 1956 Giro, or Coppi's legendary 1950 Paris-Roubaix win, shortly after switching from the French Simplex brand, and thereafter honored by the Campagnolo "Roubaix" line. The highlight of the book for me is the chapter on the "Made in Italy" clan of cycling brands. The authors describe how the void of post-war Italy created an opportunity for new industries, and how a handful of ex-pros and mechanics seized that opening to produce numerous still-famous brands like Cinelli, Masi, Colnago, Pinarello, etc. Campagnolo predated this movement, but by working together Tullio's company and these new manufacturers took over a sizeable chunk of the sport.

And not unlike, oh, Playboy, the book sets the hook in its audience with large glossy photos of items like a vintage Gran Sport mech or a carbon hub or the forthcoming Record 11 gruppo.

What I don't like about the book is the tone of the editing. Chapter titles like "Forging the Legend," "Campagnolo and Colnago: the two knights," "jerseys, champions, victories," and the endless crowing about guys who won on their parts... it's simply overdone. It's as if it never occurred to the editors that Fausto Coppi might have won the 1953 Giro d'Italia without Tullio's help. Worse, when the authors acknowledge the rise of Campy's modern-day bete noir, Shimano, the editors tag the section with "The discovery of America, the assault from Japan," dripping with distaste. There is even a section celebrating "the cult" of Campy-worshippers, derived from a Bicycling article as well as some websites and retailers specializing in lionizing the brand. It's unnecessary: chances are, if you're thumbing through the book in the first place, you don't need 20 percent more adjectives to tell who the hero of Campagnolo: 75 Years of Cycling Passion is.

In fairness, I don't really hold the writers accountable for this; all the worst examples are in titles and captions, not the text itself. In fact, the Italian title of the book,Campagnolo: La Storia che ha Cambiato la Bicicletta, or "the history that changed the bicycle," is far more informative/true and less fawning than what the English editors serve up. But I wouldn't characterize Facchinetti and Rubino as thoroughly objective either.

Glass houses though: I doubt I've ever written anything truly evenhanded about my Campy gruppos. People who love Cycling tend to love their bikes, and people who love bikes -- especially people with Italian lineage or other forms of Italophilia -- oftenreally love Campagnolo, at least the top-end stuff which caters to a less rational audience than, say SRAM or FSA or Shimano. How large exactly this audience is, I wouldn't know, but for them, this is something of a bible.