Workingman's Guide to the Centenary Giro

Share All sharing options for: Workingman's Guide to the Centenary Giro 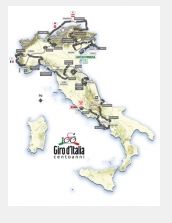 [Ed: This post is being recycled from the archives, circa whenever it was they announced the course. Many outlets are circulating their stage-by-stage route analyses, but only here at the Podium Cafe do we publish a guide to your life, and how to incorporate it into watching the Giro. Because we love you.]

One of the biggest dilemmas a Cycling fan ever faces is how to reconcile work with the grand tours. OK, a fair number of fans (Australians, people in the US and Europe who work nights, the independently wealthy, cycling journalists) have neatly sidestepped the train wreck of career and love of a good bike race on a Wednesday in May. The rest of us face choices. What follows is one fan's advice on how to make those choices. Stage by stage, here's how to handle the entire 2009 Giro d'Italia.

The kickoff of the Centenary Giro d'Italia will be full of pomp and pageantry, which I personally can't stand. Also, the team time trial is about as non-telegenic as bike racing gets. Yes, it's fun to see a team in motion. Yes, the results are not insignificant, although it didn't save Garmin last year. And yes, I personally love team time trials. It's just that there's a lot of racing left. Some really amazing racing. Pace yourself.

This will take a few moments. So... on the flip:

Strictly a sprinters' stage, one of very few. Italians love their sprints as much as anyone, and lord knows people love Italian sprinters. Next, a downtown sprint finish in Trieste will be a beautiful sight, an interesting place with a lot of Giro history. And finally, the maglia ciclamena competition may not offer much to the pure speed guys, which is all the more reason to start bagging stages ASAP. Sprint teams will be in full cry.

Hm, there may be something cool about this stage -- a funky run-in to the line or something -- but it's not readily apparent. It's a little early for long breakaways, so expect more sprinting. Pace yourself...

The climbs haven't been rated yet, but you'd have to think the riders will downplay this stage a bit. I can't find the final climb stats on Climbbybike.com, but the penultimate Croce d'Aune hump is in the 5% range. And the next day is a monster. And it's stage 4. The stage hunters will make a nice show though.

Crazy course: A mere 125 km, the first 8 of which are uphill, followed by 60 km (!) of descending, 35km to get the feeling back in your extremities, and a 25km climb from a low valley to 1850 meters. I calculate something like a 6% average, and it's a short day, but make no mistake, it's business time.

The peloton rolls up its sleeves today... or doesn't, and rides a ridiculous piano tempo on day one of two long, long stages with no shortage of minor climbs. This sucker has long breakaway written all over it, particularly with two mountain passes to demoralize the sprinters. Tune in to see if the break can drive it home.

For all the wonderfully entertaining stages this Giro offers, it's interesting that the organizers have remembered to tuck in two completely miserable, old-skool grinds to put the hurt on the peloton. Grand tours aren't for punters, yo. Today's stage is about 200km of barely perceptible incline, a 1300-meter rise, before a 35km screaming descent to the line. Probably one for the sprinters, though not all of them. Or Paolo Savoldelli.

Speaking of Savoldelli, the peloton rolls into his hometown here, after probably enough climbs for the sprint teams to leave this one to the break hunters.

What?! A circuit race around Milano? I'll defer to the officials out there, but I'm pretty sure a CR doesn't come with funky rules like a criterium; it's just a road race that runs several laps, here eight laps of a 16km circuit, after a brief promenade. Has a grand tour ever run a major urban circuit race? This is just too unusual to miss. I have literally no idea what will happen.

Unlike calling in sick or taking a personal day, only by quitting your job can you be 100 percent certain nobody from work (or friends, or family, for that matter) will bother you during this stage. This is not only the queen stage, not even close. No, it's a retracing of the queen stage of the 1949 Giro d'Italia all-time classic Fausto Coppi romp, when he beat Gino Bartali into a complete pulp. The Giro's longest stage consists of a mere five deadly climbs through the French and Italian Alps, followed by a 55km descent to the line. Surreal... beautiful... historic... cycling. As you all know, this stage has been altered to stay within Italian borders and away from some of the more problematic (in May) French Alpine passes. But it's still massively long -- 260km -- and portends a huge battle on the slopes of Sestriere, as well as an end-of-stage ramp in Pramartino before a descent to the line. Still the Queen Stage. Really, quitting your job is the right thing to do.

Nobody in his right mind will feel like riding on this day. This will be a 200km parade to a sprint. It's hard to imagine this becoming interesting. And honestly, in light of the stages before and after, I'd feel terrible if they felt pressured to work hard on this stage for my amusement.

RCS delivers the rumored endless time trial. The length boggles the mind some, and the bumpy shore route begs the question whether this race will shake out much differently than the Tour's standard 50-55km ones. A lot will happen to the GC, of course, including as many as a half-dozen spectacular blowups, but the action is mostly in the last hour, and the beautiful pictures won't mean as much as what the clock says. Classic stage... but personally road stages are more fun to me.

Short and flat. Hopefully Mother Nature will throw in a tailwind. These guys will have seriously earned it. A pure sprinters' stage to one of the world's great cultural capitals, as well as one of the original host cities in 1909. The last 10km will be beautiful to watch.

The visit to Bologna marks the fourth original-Giro city in four days (Firenze, Torino, Genoa/Arenzano). And an exciting day as well, as the Giro shifts from sprint finishes to more challenging finales. Profiles aren't especially accurate, but it looks like there's a good 4km of tough climbing to the line. Wind up all those Italian climbers who can sprint and grab an espresso. Update, by Chris: Apparently this is the Giro dell'Emilia finishing climb. Might need to upgrade this to run a long "errand".

Stage 15, Forli to Faenza, 159km
Sunday, May 24
PdC Recommends: Step out to deal with a "minor emergency"

Just a bear of a stage, with six moderate climbs (four rated), and a 24km descent to the line. The peloton probably won't survive intact on this one, barring any agreements. The going gets tough after today, so the stage hunters will be all over this one.

Maybe the second-hardest stage of the race, a long hump through the Marche over four rated climbs and a half-dozen others. The last ten km up Monte Petrano will make a difference. This is a hard climb, mostly over nine percent. With the world talking about the glitzier stages, this might be one that catches people by surprise.

At this point, assuming you've followed our advice all along, calling in sick again might not work. I dunno about quitting, but this is no time to risk having to work. Do what needs to be done. The Blockhaus climb is just legend: 28km averaging over 7%. Also, the stage is only 79km, just long enough to warm up before the main course. Very strange, but one possible outcome is that the contenders use the short day and go all out. On day 17, they should be doing so. You never know, but this is the safest bet for best day of racing.

Looks like there might be an uphill finish to this one, if the profile is to be believed (which it probably isn't). In any case, no sprinter in his right mind -- save for the maglia ciclamena perhaps -- will still be left in the race, so the finale will be fun.

At this point you're probably about to be fired anyway, and the certainty of unemployment will give you the space you need to watch this memorable race. As for the course, it's the last day for the climbers, a potentially long, hot stage through the outskirts of Naples, and up the active volcano that destroyed Pompeii. Every time I picture this stage I start giggling, but then I don't have to climb 1000 feet in the last 13km of a hard race.

One last time for the Cunego types to snag a stage. You have to be questioning Giuseppe Saronni's judgment about now, right? I mean, the Giro will never do more to cater to the skillset of Damiano Cunego and Alessandro Ballan, their two somewhat distinct classics champions. But Saronni has to make a statement by boycotting the rollout, because... why again? Guiseppe, ever hear of picking your battles?

It's hard for me to say anything objective about Rome. My honeymoon was there, my bloodlines run through it (Mr Van P bears an uncanny resemblance to Francesco Totti), and, well, it's Rome. As for the course, it's short and flat, so it won't make for huge gaps, but the race starts at the ancient Fora, takes in St. Peter's Square, the Circus Maximus, Villa Borghese, promenade east of the Vatican, and ends with a circuit around the Colosseum. That's not the coolest time trial; it's the coolest possible time trial. Returning to a normal life afterward will be unthinkable, so... good luck.