Tour of California announces the first 8 teams, all ProTour

Share All sharing options for: Tour of California announces the first 8 teams, all ProTour 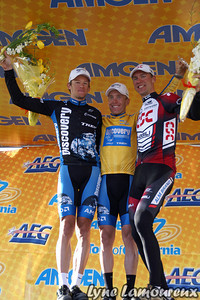 A few minutes ago, the Amgen Tour of California organizers announced the first 8 ProTour teams that will race in February:

The full list of teams will be announced in January, with final rosters due in February. Several of the ProTour professional cycling teams will hold their pre-season training camps in California.

No major surprise on the list so far:  race-sponsor Rabobank, the 2 US-registered ProTour teams, Columbia High Road (is that their new name for 2009?) and Garmin-Slipstream. Astana with two-time defending champion Levi Leipheimer and of course returning Lance Armstrong. Team Saxo Bank with its new bike sponsor, Specialized. Liquigas and Quick Step are repeat participants. The only minor surprise is the French team, Ag2r-LaMondiale. I guess they heard about the terrific weather we had last year.

note: podium pic is from the 2007 edition of the race