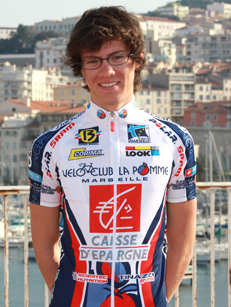 After a year of racing as part of one of the best amateur teams in France, Alex Howes is coming back to his roots, rejoining the Slipstream organization, as he will be racing with the U23 team VMG/Felt for the 2009 season. Through it all, Alex has chronicled his adventures through his blog sharing his ups and downs with the world.

The 20-year old (almost 21) Alex Howes was born in Golden, Colorado. He came up through the ranks of the Slipstream organization first as a junior with the 5280 team and then spent a year with the Slipstream squad in 2007. He capped that season with a foray to France racing at the Tour du Limousin and the GP Plouay where he launched the first attack of the ProTour race.

At the end of 2007, he joined one of the best amateur team in France, the VC La Pomme which is based in the Marseille area to continue his to learn to achieve his goal of racing professionally full-time in Europe.

"It was something I’d always wanted to do [I thought] I won’t have too much problems with it. It definitely slapped me in the face a lot harder than I thought it would but you get to hang out by yourself a lot. I don’t know how much I necessarily learned about myself as a person but I definitely learned how to live with myself as a person without any other persons around."

I caught up with Alex right before the US Cyclocross Nationals where he finished fourth in the U23 race.

Read the interview on RoadBikeReview.com