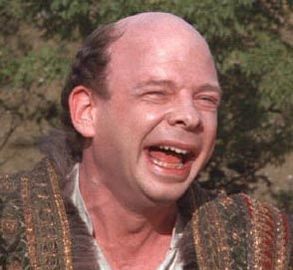 It's easy to get caught up in personalities. We do all the time. With our loved ones and with our heroes, we admire what we call "good qualities" and deplore what we call cheating. We look up to Stuart O'Grady and throw darts at Ricardo Ricco. This is the way of the world, no?

But reality says otherwise.  It says that the world of personalities, the world of the ego, is a myth. Now I'm not about to get into spirituality here but I am dabbling in sadistics in this post. Specifically I'm asking the question when do pro cyclists begin to decline in ability?  Ultimately its true that regardless of how good a cyclist is, how hard they train, how much EPO they take, how smart they are, whatever- they start to lose their abilities, their stamina, and perhaps their interest in competing well enough to win.

But at what age does this happen? When does the body begin to give out, when does the mind get interested in other things? This is where sadistics comes into play because with 100+ years of records we can see riders improving, then declining: an arc in ability that mimics the arc that our lives take from birth to death. (Isn't that our ultimate interest in sports is anyway?) So below the fold I'll take you on a journey with the most accomplished names in cycling to see at what point we peak in ability that thus begin that inevitable decline.

There's many ways to find the peak year of cyclists but what I did here was look at the winners of the greatest cycling races held to dat: the winners of the three Grand Tours, the five Monuments, and for completeness, the winners of Paris-Tours. That's nine races, eight of which have had winners for about 1000 years now. 832 winners in fact, though of course the best riders of all won these events multiple times. Let's cut to the chase and get to the bottom line and then we'll look at interesting aberrations.

Often one hears announcers saying how 30+ year olds are smarter or better in some way but the facts say that's not true. There are of course individuals that can win one of the Big Ones when they are 30+ but the odds are against them. Take Eddie Merckx. He won these races 30 times and only four times did he win after his 30th birthday: LBL when he was 30 and MSR at 30 and 31 and Flanders at 30. So averages are fine and all but lets take a closer look at the distribution of winners by age: 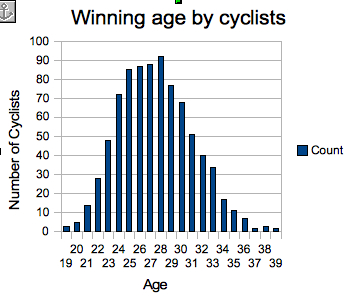 This bar graph is a bit hard to read. Realize that the tallest bar is 28 years old and contains not only the average but the median age. Once you se that you then see that older than 28 the numbers of winners drops faster than younger than 28. There's also a bit more of an extreme tail for the older winners.  Let's pare this down a bit and just look at  Grand Tour winners: 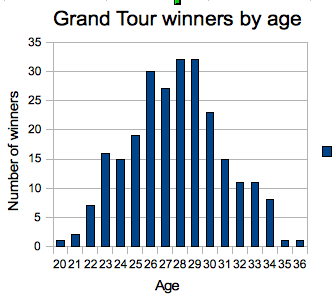 A little easier to read! Notice that the extremes from the bar graph just above are cut off here. No one has won a Grand Tour at ages 37-38-39 due probably to the greater rigor of those events as opposed to the Monuments. But you see the same basic thing: older than 28 the numbers of winners declines faster than younger than 28.
Now lets look at a final bit of data: the average winning age by decade:
00-08: 29.9
90-99: 29.4
80-89: 28.0
70-79: 27.4
60-69: 26.2
50-59: 27.8
40-49: 27.4
30-39: 25.8
20-29: 28.3
10-19: 25.8
00-09: 26.5
Well that's interesting. The average age of winners looks like its getting older! Maybe we can cheat death! Actually though a closer look shows that the average age has gotten older twice.  The second time is now, and I'll deal with that in a minute, but the first time was after Wold War One. Since I'm going by decade here that post WW1 surge is a bit camouflaged here so I'll spell it out without another chart: from 1919 and for six years after the average age of winning is 29.3. In fact there were only 1 23 year old, one 24, and three 25's.
But most interesting within this time period (19-24) its the four French races that really bring up the average winning age: together LBL, P-T, P-R, and the Tour have an average winning age of 31.18, while the others (Flanders, Lombardia, Giro, and MSR) have an average age of only 27.4 with Flanders having the youngest winning average of only 26.0. So the only thing I can guess is that the French bled their youth at a higher rate than the Italians and Belgians and so the old geezers had an easier time of it in the French races. (This was a time when racers crossed national boundaries much less frequently to race than today.)
But back to today and the increasing age of the winners in our sample. Why? Several possible reasons:
- The team concept is stronger and teams are more likely to go with a past winner than skip over him to a younger guy. In terms of raw power who do you like- Gesink or Menchov? Kreuziger or Basso? Contador or Armstrong/Leipheimer? I think the younger guy wins every time but the teams will back the older guy until they are way past their prime normally. In light of that, Riis' decision to let go of Sastre in favor of the Schlecks makes a lot of sense.  Bruyneel better not piss off Bert- or Brajkovic.
- Demographics + affluence. Europe and WASP America are getting older and reproduce below the replacement rate. That means that fewer of those youngsters are coming into the sport- all sports really. You see this easily in European soccer but cycling is more insular obviously: its still about Caucasians.
In addition richer people tend to go into sports at a lower rate than working class or poor people and since much of the real menial jobs in Europe, the true scut work, are handled by Turks, North Africans, third worlders who don't cycle that exacerbates the smaller talent pool.
Together demographics and affluence get fewer younger riders into the sport and thus allow older riders to hang around and win stuff.
- Better medicine now. This is both good and bad. The good part is that injuries can be attended to much better. Just think Merckx racing now. When he finished racing his body was beat up and he just couldn't go on. If he were around today he would have been patched up much better.
Now the bad side of improved medicine: doping. Well not just doping but more scientific doping. No more do we get Tom Simpson's speed+ ETOH combo for success. But an interesting twist here is that although it tends to be the climby types that get busted, the race with the oldest average age of its winners in the past decade is Paris-Tours (32.3): before Gilbert this year (age: 26) only Jacob Piil in 02 (age 29) was younger than 30 going all the way back to 1996. Before 96 and going back to well the beginning there was only an occasional 30+ winner: 92 (Redant- 30), then 78 (Zoetemelk- 33) then 76 (Dewitte- 30) then 67 (Van Looy- 34).. you get the idea. So what do you think is happening at the most sprinter friendly of all races I looked into in this decade? (A side note on Paris-Tours: for "the sprinters classic" if Petacchi doesn't race this year none of the top sprinters- you name 'em- will have tasted victory in this race.)
----------------------------------------------------------------------------------------------------------------
I apologize for the digressing; there's just so much interesting info here that I could get lost in the history of each of these races. ( Fortunately we have blogs like The Virtual Musette to read for the larger picture.) The point though is that overall the winners ages have gotten older since the 60's. Maybe I'll stop here and get you to guess as to what's happening and predict if the trend will continue. One last thing, a sports adage that illustrates that while the announcers talk again and again about the older riders, its still the under 30 year olds that rule the sport:
You make your rep in your 20's and your money in the 30's. 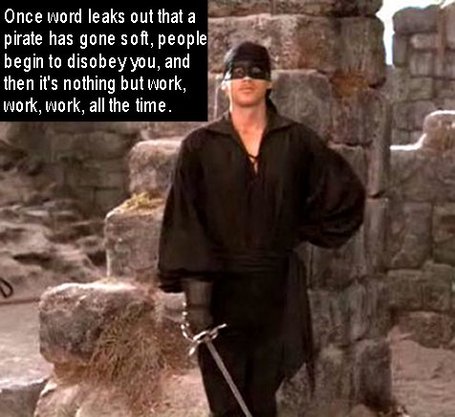