As part of the Las Vegas Interbike extravangaza, last Thursday's night was held the final race of the USA Crits Series.  The event organizer did try to make it interesting by having a beer tent,  adding dancers (it is Vegas) and more, but for me  it came down to a sketchy parking lot crit with bad lightning. Maybe I was just tired after two long days in Vegas.

Also, a one-hour industry crit was scheduled in between the women's and men's races with the men starting at 9:30pm. Way too long for an industry race in my opinion or they should open up the VIP tent to the media as it killed the buzz. So much so that the announcers were telling the crowd, the majority being attendees from Interbike, that they were the quietest and lamest audience  they had even seen.

But the cyclists took the race seriously as the overall winner was still up in the air with only 64 points separating leader Kelly Benjamin (Cheerwine) from Vanderkitten’s Jennifer Wilson. And to add to the pressure, a lot of cyclists are still looking for a contract for the 2009 season.

In the final 4 laps of the 40 lap women's crit, Jen McRae (Advil/Chapstick) attacked with only one other rider who couldn't keep up and with 2 laps to go McRae went solo to victory. Tina Pic won the field sprint for second place over Laura Van Gilder. 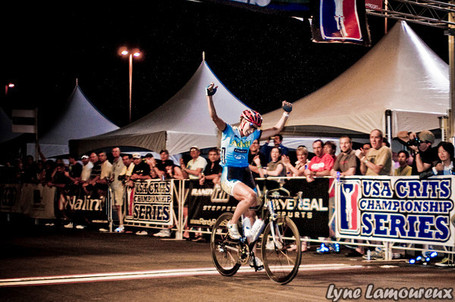 "This is such an awesome way to end the season. I have been consistently finishing in third all season long. I have been quietly wanting to improve on that….to do it here in Las Vegas is totally awesome. I am pumped." said McRae.

Women race in front of purple thingie where the dancer did her job (no, no photos of the dancer) 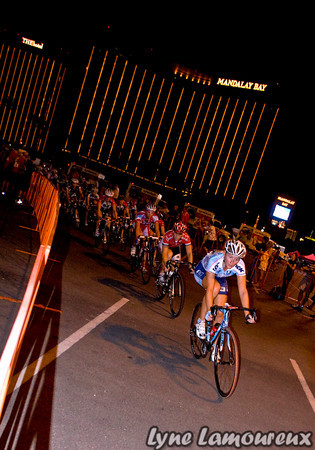 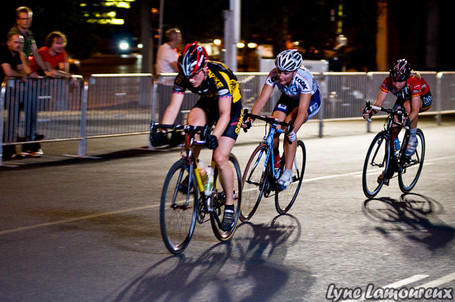 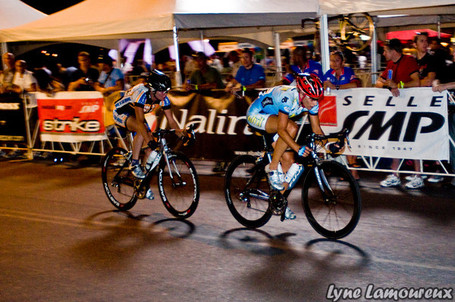 Jen McRae is off with Christina Smith (LoneStarWorks.com) 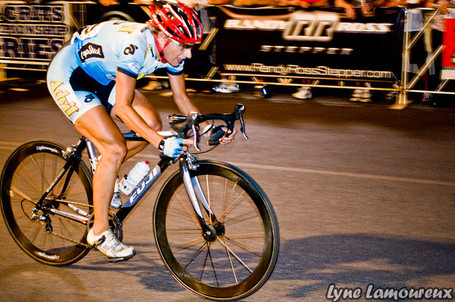 McRae is solo with 2 laps to go 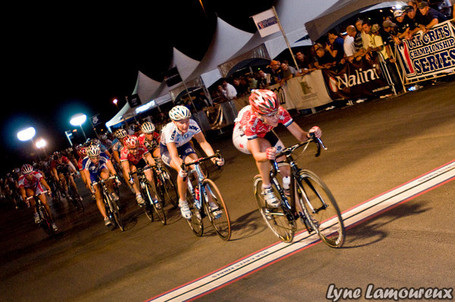 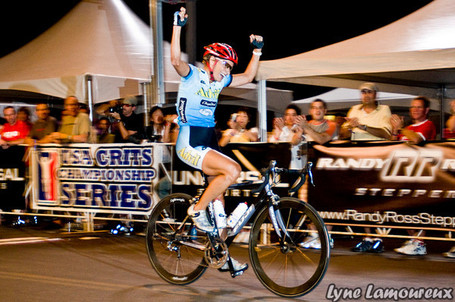 A happy McRae hopes that this win will help her get a contract for next year.

"It is not my last year of racing. I am not really sure what is next. Advil is not sticking with it. This is another reason to come to Vegas….to talk to some sponsors for the following year. " said McRae.

In the end, there were no changes to the USA Crits standings. Kelly Benjamin won the overall with Jennifer Wilson in second and Taitt Sato in third. Vanderkitten won the team title.