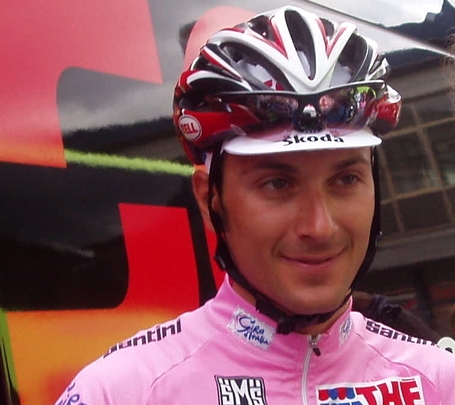 Ivan Basso is hoping for another chance to wear Pink in 2009.

After a brief flirtation with Damiano Cunego, Gazzetta dello Sport has returned to their true love, their one and only, Ivan Basso. Does Claudio Ghisalberti live at Basso's house? Maybe. Or, maybe he just has a crush on Basso's sister.

In this episode of "We Love Ivan," Basso and Michele Bartoli rode the long stage 12 crono course of the 2009 Giro d'Italia. At 61.7 km in length and running from Sestri Levante to Riomaggiore down the rugged Cinque Terre coastline, this crono will be as hard on the legs as it is easy on the eyes. The course constantly climbs and descends on small roads. It is long and technical, and may bring a few surprises on race day.

Basso and Bartoli rode the full course, then drove back over it to study the important sections. Basso said afterwards, "I am shocked, because this is a truly difficult crono." "It inspires fear," he added. It is very long with two technical descents which are "for the specialists." The descents total 9 kilometers, and offer the only place to recover. The other 52-53 kilometers are where the winner will make the difference, Basso believes.

The first 27 kilometers will put the riders under pressure, "because there is the climb to Bracco or a false flat," the former Giro winner explained. There is no place to recover. "Then, there is 7 kilometers of very very technical and demanding descending," Basso recounted. After the descent comes the only flat section of road in the entire stage. It doesn't last long, a kilometer at most. Soon, the road winds up the second climb of the day, the Passo del Termine. Basso continued, "it is not short, there is 6-7 kilometers of true climbing, which leads to another false flat of 10-12 kilometers." A descent which Basso described as "truly dangerous" follows the Passo del Termine, and the stage finishes on a short climb. Basso estimated finishing times around 1 hour, 30 minutes, if there is no wind.

"In my life, I've never seen a course so demanding," concluded Basso. He is talking to his bike sponsor, Cannondale, about making a special bike just for this stage. The roads are very technical and for a crono, 61.7 kilometers is a monstrous length. Certainly, a rider can lose the Giro here.

The stage winner will likely come from the ranks of the crono specialists. Fabian Cancellara will love this course. It will suit his powerful style and his acrobatic bike handling skills. Paolo Savoldelli may well wish he had not yet retired. For Basso, these same descents may well complicate his efforts to wear the Pink jersey in Rome. He has never descended especially well, even less so on a time trial bike. After three years away from racing, Lance Armstrong remains something of a wild card for the Giro. If he shows up on his best form, though, this stage is made to his order. He is no slouch as a bike handler, and has always done well against the watch. Little wonder that Danilo Diluca called this stage "a gift" for the American.

At the same time, the technical nature of the roads and the constant climbing may well allow the climbers like Diluca, Gilberto Simoni, and Damiano Cunego to limit their losses. They will not win the Giro on this stage, but they may prove able to avoid losing it. All three descend well. They will hope for a calm day. If a headwind blows up, the small climbers will face a long and potentially disastrous day.

The race organizers made a bold move with this long crono. It may well end the race for the general classification. Certainly, at least one hopeful will fall out of the running on the road to Riomaggiore. But with the climb to Vesuvius and the forbidding slopes of the Blockhaus still to come, the climbers will have a few more chances to exact their revenge. This is a last week plenty worthy of a centenary celebration and the outcome should remain in doubt until the race rolls into Rome.