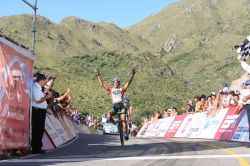 Lucas Sebastian Haedo, won today's 174.4 kilometer stage 2 of the Tour de San Luis and now holds the lead in the general classification. Haedo, who rides for Colavita escaped with Nazaret Prado of Brazil and Alfredo Lucero of Argentina B. The three riders established their winning break after only 49 kilometers of racing and built up a lead of over 12 minutes on the way to the finishing climb. Haedo outsprinted Prado for the win, while Lucero finished just 3 seconds back. Carlos Ochoa and José Serpa, both of Diquigiovanni, led the main field across the finish just over 2 minutes down.

"I did not expect to win the stage," said Haedo of his breakaway effort on the Tour de San Luis website. Indeed, Haedo is more likely to win his results in the bunch sprints. But when the time gap opened up with just 40 kilometers left to ride, he believed he had a chance. "For tomorrow, we will wait and see. I am not a great time trialist," explained the modest Haedo. "I will do the impossible to maintain the jersey of race leader," he promised.

Tomorrow's stage is a time trial covering 19.8 kilometers around San Luis. The route appears mostly flat, beginning and ending at a Velodrome. Perusing the start list, the course should suit specialists like Ben Jacques-Maynes, looking to hone his form for the Tour of California. Likewise for Jason McCartney of Saxo Bank. Wednesday's stage could also offer an opportunity for the Ivan Basso to test his legs in his first race after his two year absence from competition. Basso made a brief breakaway attempt during Monday's stage 1, but quickly returned to the main field which finished together in a bunch sprint won by Mattia Gavazzi of Diquigiovanni. Basso's team-mate Vincenzo Nibali might also ride well against the watch Wednesday, though it is early days yet for the Italian who intends to peak for the Tour de France in July. Best bet? A local rider looking for an early season success in front of the home crowd.

Two riders have left the race as a consequence of crashes: Angel Vicioso of Andalucia and Hector Gonzalez of Fuji-Servetto. Both have broken collarbones, though they did not crash together. Hopefully, they will now have gotten their bad luck for the season out of the way early.