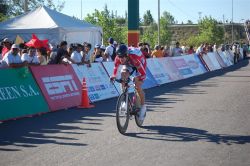 Tom Zirbel of Team Bissell narrowly missed winning Wednesday's stage 3 of the Tour de San Luis. Zirbel finished second by nine seconds to Jorge Giacinti of Argentina A in the 19 kilometer crono. Zirbel's team-mate Ben Jacques-Maynes finished fourth at 14 seconds down, giving Team Bissel two riders in the top five of the stage. Andrei Grivko of ISD finished fifth at 22 seconds. Grivko's effort moved him up to fourth in the general classification.

Over at Team Liquigas, Italian Ivan Basso placed ninth on the stage at 38 seconds down, while Vincenzo Nibali rode to a 14th place finish at 1:14 down. Saxo Bank placed American Jason McCartney in 6th and Marcus Ljungqvist in 33rd. Full results.

Thursday's stage 4 covers 159 kilometers from San Luis to La Carolina and is a feast for the climbers. The stage includes two intermediate sprints and two categorized climbs. The first is a third category climb, the second is a second category climb. The stage begins in San Luis at 750 meters above sea level, before descending to sea level. Then, it's all climbing to the finish, which tops out at 1590 meters in altitude at La Carolina. The stage offers opportunity for climbers like José Serpa of Diquigiovanni, Nazaret Prado of Brazil, and Alfredo Lucero of Argentina B, who are all highly placed in the mountains classification. Of course, an early escape could quickly change it all on Thursday.

Update: Ivan Basso reported that he was satisfied with his effort in Wednesday's crono. "I went 'all out' and the legs responded well," he said. "I went out hard, recording the third fastest time at the intermediate check, then, the wind at the finish wore me down," the former Giro winner recounted. Basso estimated his level at 60 percent of his best, but also said that his form is constantly improving. The crono also offered him a chance to check the position on his new bike. Liquigas DS Mario Scirea praised the fourteenth place finish of Vincenzo Nibali, who had intended to use the day as a rest day. He called Nibali's ride a "very positive sign" of the young Italian's form.

Gav's note: This is the last stage update I will do for the Tour de San Luis. I'll try to write a wrap-up post at the end. In the meantime, for those who wish to follow the race stage-by-stage, Lyne over at Podium In Sight is doing daily updates on all the Argentinian hijinx.