Argentinian sprinter Juan José Haedo won the final stage of the Tour de San Luis on Sunday. JJ Haedo's win marked the first victory of the season for Team Saxo Bank and provided Haedo with a most excellent birthday gift. Saxo Bank riders Matti Breschel, who finished second on the climb to La Carolina on Friday, and Lasse Bøchman rode the early break, but it all came back together in the end. Haedo finished it off, by winning the sprint.

Mattia Gavazzi of Diquigiovanni, who won the opening stage of the race, finished second, while Luis Mansilla crossed the line third. ISD sprinter Oscar Gatto finished fourth. ISD rode under the radar for much of the Tour de San Luis, though Andrey Grivko placed fourth in the general classification.

In the battle for the general classification, Alfredo Lucero of Argentina won the overall. Lucero is not a full-time bike racer, he's a farmer. "Yes, I am a farmer. That is my job," he explained. "The bike is a love, a passion." Every morning, Lucero goes into the fields to work along side his father on their farm. "With my father, I raise animals, horses mostly," said Lucero. The family is not wealthy, the farm makes "the minimum to eat." After working in the fields, Lucero rests "a little," then goes out to train. He is not entirely a stranger to elite competition, though. In 2000, he made the Olympic team on the mountain bike. A few days before leaving for the Games, he broke his right shoulder, and could not start. After that, he shifted to road racing. His misfortune in 2000 indirectly led Lucero to today's success.

Currently, Lucero does not have a team, or a bike sponsor. "I bought everything for myself, from bike to shoes, from helmet to sunglasses," he confirmed. He won the race on an eight year old bike, an aluminum Pinarello Prince, built up with Ultegra. Upon hearing the story, Fausto Pinarello commented, "this boy has better legs than his bike. But also, a bike that

can last so many years is good." Then, Pinarello said he would give the Tour de San Luis winner a new bike as a gift. Lucero now has a new red, black, and white Pinarello Prince (Prince-wishers, take note.)

The young farmer remains in disbelief about his big win. "I can not believe this. I could never imagine beating Basso, he is the best," exclaimed the 28 year old. Ivan Basso, reminding us why we liked him before we distrusted him, replied, "No, my friend. The best, is he who wins. And you have won. It is true that you are the strongest." Basso gave his sunglasses to Lucero as a gift.

For his part, Basso declared himself satisfied with his performance in Argentina. Basso finished ninth in the crono, sixth on the climbing stage to Mirador del Sol, and fifth in the general classification. "The balance is very positive for the nature of the effort and the good sensations during the race," he reported. "I did not have the condition to win, but to be a protagonist in every stage shows that the attitude is the right one." Basso will next ride the GP Costa degli Estruchi, before traveling to the United States for the Tour of California. Both races will contribute to his steady build-up toward his main goals of the season. Basso's team-mate Vincenzo Nibali finished 14th in the general classification, with his best day coming in the time trial. "I am satisfied, because I am leaving with better condition than when I came to start," commented Nibali. 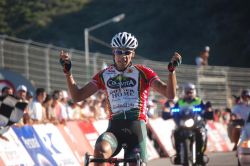 Ben Jacques-Maynes of Team Bissell finished an impressive eighth in the general classification at the Tour de San Luis. Jacques-Maynes is rocking the early season form that could well bring him a result at the Tour of California, where he nearly, though not quite, wore the leader's jersey in 2007. His team-mate Tom Zirbel also put in a good ride at the Tour de San Luis, placing second in the stage 3 crono. Zirbel left the race early, suffering food poisoning, according to Podium In Sight.

Lucas Haedo and Luis Amaran, meanwhile, gave U.S.-based Colavita two stage wins to celebrate. Lucas Haedo also won the points classification. A very nice start to the year for them, and Colavita will head to the Tour of California in a few weeks.