Share All sharing options for: VN: 2009 Is All About the Comebacks

They're here. This year. Get used to it. 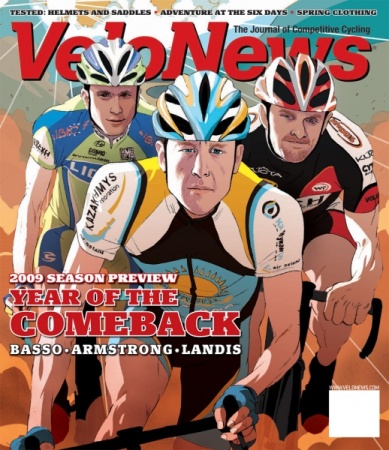 VN's preview, due out during the ToC or something. I'm not interested in opening debate here. Just know that there will be non-stop competition between the media's obsession with these three guys and our obsession with, say, whoever just won the Tour de Romandie. I would counsel patience with the preaching to the less tuned-in masses, but at some point the media will need to put these stories in their proper perspective. Other than the Giro, I don't expect many wins from this coterie.

On another note, as a graphic novel fan (yep, I went there) I see this particular cover as a positive development. Oh, and just wondering, but does Lance want to be in this picture? I mean, at least as far as the UCI is concerned, one of these things is not like the others. But then Floyd might object too... forget it.