Philippe Gilbert of Silence Lotto joined an historically elite echelon of cyclists today by completing the "Autumn Double" of wins at Paris-Tours and the Giro di Lombardia. Gilbert becomes the first man since Jo de Roo in 1963 to accomplish this feat, thought to be an historical artifact in the age of specialization. Along the way Gilbert has won four times in just over a week, making him hotter than the surface of the sun.

Today he left no doubt. Racing against a truly elite, motivated, and positively flying group in the final selection, Gilbert launched a blistering attack on the San Ferma della Battaglia, the race's final ascent, which shattered the entire field save for Samuel Sanchez. [It should be mentioned that World Champion Cadel Evans was seen lifting the pace in the early stages of the climb, perfect tactics for his teammate.] Sanchez and Gilbert, two elite descenders, dropped down the climb with a 12" lead over the field and never looked back. Sanchez stayed doggedly on the wheel of the red-hot Gilbert for the last KM, recognizing his slim chance of beating a rider on such form, but even these tactics couldn't stop the inevitable.

This was a great, great day of racing, truly one of the season's best, and a splendid way to end things. 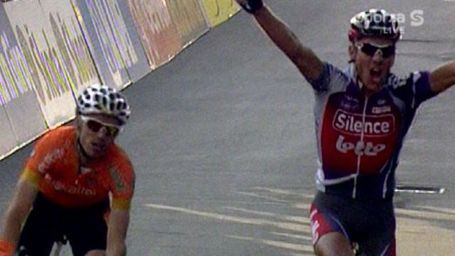