Following up on my rest-of-the-season post, here's a bit more detailed info for this weekend's races. Mind you, the Circuit Franco-Belge will be ongoing, but a look at the roadbook doesn't show much in the way of cotes or bergs, so I will assume that the Tyler Farrar Show will simply keep playing. Which leaves the following menu items for your enjoyment...

I don't know if there is much more you need to know about the Memorial Cimurri than the startlist, altimetria, and past winners, but did you know? It honors Giorgio Cimurri, who seems to have been some sort of sports doctor legend in Emilia, and whose nickname may or may not have been "pine eye," presumably due to his toughness rather than some sort of wooden vision thing. Had enough? OK, here you go: 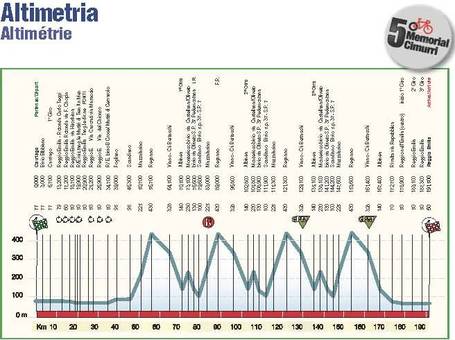 Not sure how clear that is, or why it isn't, but the incline is in fact an 85% grade of 200 miles, climbed four times. Or, wait, the Regnano... maybe more like 8%, and 250 meters. Anyway, the race finishes with three short, flat circuits around Reggio Emiliana, so whoever owns a sprint and survives these climbs is a strong contender. From the still-spotty startlist we see defending champ Mikhaylo Khalilov, plus a long list of guys who seem to be in training for Lombardia: Cunego, Basso, Soler, Sella (boo!), Visconti, Pellizotti, Bosisio, Ginanni, Scarponi, Gasparotto and Gerdemann, to name a few. Not sure who wins, but as long as Sella gets dropped on the first climb, I'll be satisfied.

200km circuit from Ahlen to Munster, in northwestern Germany just a short hop from the Dutch border (note to Dutch readers: no, really, don't get up; you should hold out for a Rotterdam start next year). I can't find a profile, or maybe it was too flat to be seen as such. Bottom line: sprinters' affaire, defending champ Greipel is there, as are Eisel, Boasson Hagen and much of the Columbia A-team; plus Ciolek, DeHaes, Van Hummel (!), Rene Haselbacher, and wunderkind sprinter Boy Van Poppel. Should be a good romp.

Another sprinters' affaire, and by that I mean it has no less than ten intermediate sprints along the nearly circular route from the colorful-sounding Mouilleron le Captif to La Roche sur-Yon, in the Vendée region of western France. There is mention of the odd Cote here and there, but past winners are all pure sprinter types (Kirsipuu, Thor, Koldo Fernandez last year) so adjust your expectations accordingly. The official site mentions France 3 and Eurosport, so live video is not out of the question.

In all cases, we will open live threads and ask y'all to help locate video sources. This may be a challenge, but then, you're not chicken, are ya? Are ya?! Didn't think so.