Giro dell'Emilia: Who What Where

Share All sharing options for: Giro dell'Emilia: Who What Where

Italy's Third Monument goes off tomorrow for the 100th year (92 editions). I'll laud its greatness in a second post, but for now here are the basics that you should know.

While Emilia may be home of the Po Valley, one of Italy's largest rivers, it's blessed with more than enough Appennini to make for a grueling race... and to raise its share of great cyclists. The latter starts with the late Marco Pantani... and now that we've made our Pantani reference, we can move along. Anyway, the race follows the valley from Sassuolo east to the outskirts of Bologna, where the race finishes, but not before a long detour out to the region's bigger climbs. See for yourself:

Those two pointy outcroppings in the middle are the Appenine climbs: the Monzuno and Loiano. They appear to cover about the same altitude gain in about the same distance, and while I can't find any details about the Monzuno, Climbbybike.com says the Loiano is 6.74km at an average grade of 5.8%. Assume for now that the Monzuno is roughly similar, though of course climbs are like snowflakes. Anyway, between the two, the riders will gain some 900 meters in a span of 20km (including the descent). This should shed a sizeable number of domestiques and non-contenders, though they're too early to truly decide the race. The last couple years an early break has taken the mountain points, only to succumb to the chase before or just into the final circuits, where the outcome happens. I suspect this is a well-established pattern. 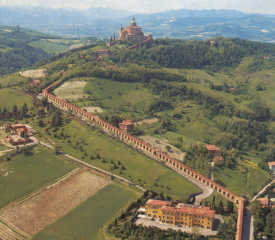 The final circuit climbs up to San Luca, a section of Bologna famous for its arcade of 666 porticos, one of the longest arcades in the world. As you can see from the photo on your right, it's also perched (like so many of Italy's wonderful sights) atop a leg-busting little hill, which the riders climb five times, including the last 2km of the race. This is generally where the deal goes down, though whether that happens in the last 100 meters or in a daring escape further out is for the protagonists to decide. Last year it was Danilo DiLuca at the line; the year before Frank Schleck attacked at the bottom.

Just a quick rundown of the startlist. Among the protagonists are a large number of riders aiming for Lombardia, and unlike the Coppa Sabatini, at Emilia they're out to win. Rarely do riders double at Emilia and Lombardia -- the only ones I can see after a brief look are Michele Bartoli (2002), Eddy Merckx (1972) and Fausto Coppi (1947, 48). But Emilia's honor roll encompasses the greats of the sport, even in recent times: Ullrich, Basso, Simoni, Rebellin, Schleck and DiLuca. OK, so we know a little too much about several of those riders -- sadly, that's cycling -- but at least it tells you this race isn't for punters.

This year's crop is led by World Champion Cadel Evans and perennial fall favorite Damiano Cunego. Other big names: Ivan Basso, Vlad Karpets, Jani Brajkovic, Kim Kirchen, Thomas Lovkvist, Robert Gesink, Peter Velits, Leenoos Gerdemann, Alexandr Kolobnev, Giovanni Visconti, Domenico Pozzovivo, Juan Soler and Michele Scarponi.  Evans won't have Philippe Gilbert with him, nor will Cunego have noteworthy support. Rather, the strongest teams start with Saxo Bank: Kolobnev, always hot this time of year, has help from Jens! Voigt, Jakob Fuglsang, the Sorensens, and Gustav Larsson. Juggernaut. Next would be Serramenti, IMHO -- Scarponi isn't exactly on fire, but he and two Berts (Bertolini and Bertagnolli in this case) make a pretty formidable home trio, after the latter's third at the Coppa Sab yesterday. Then there are names: Columbia is always loaded on paper, and Lovkvist's success in Italy would make him a good match if I thought he were on any real form. Astana truly can't be overlooked: Brajkovic was good in the worlds ITT, and has Chris Horner and Alexandre Vinokourov (oy) for help. Gerdemann presumably captains a Milram team of Velits and Fabian Wegmann. That's probably your top five squads, I would estimate.

Live video will be determined; keep fingers crossed and be prepared to get up early. We will be here.