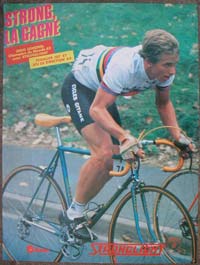 Aren’t titles fun? So what I meant to say is, Greg Lemond the greatest cyclist of the modern era, P.E. ( Post Eddie ). [ed: I changed "all" to "modern" and added a ? No false advertising on the front page!] Actually, the question before us today is whether Greg Lemond "could" have been the greatest Grand Tour racer of our time. It’s an interesting question and I will tell you who has been putting the question out there in a minute.  First, we need to re-live the awakening of American cycling.

In 1983, a crazy rumor started spreading that there was an American cyclist that was as good as some of the best Europeans. This was impossible. At the time, the only bicycles Americans could ride were the ones with a pretty white basket in the front and a little bell that goes ding, ding, ding.  Like Magic Johnson and Michael Jordon toyed with the worlds basketball teams, Bernard Hinault and Laurent Fignon were in a league far above the riders on the far side of the Atlantic. Then one day there was an argument on bike. It seems a cycling director was ordering his young prodigy to slow down and wait for his captain. There was a heated argument in the middle of the race(! ). The young man complied and the Bernard Hinault won his 5th TDF. The next year there was another controversy.  The legendary captain, for whom the young prodigy had waited, had promised to return the favor the next year and it appeared he was breaking his promise.  This is how the average non-cycling fan became aware of the great Greg Lemond.  My heroes of that day were Emil Zatopek,  Alberto Salazar ( Alberto ? ), and Greg Lemond. Long distance running was my sport at the time and I admired those men who never quit and were willing to go beyond all reasonable limits to break their rivals. So Lemond fit right in with the tough men of sport.

Then came the 1989 TDF. Following a terrible hunting accident where Lemond was shot in the back with a shotgun, Greg Lemond was making his comeback to cycling. A comeback after appendicitis and with 37 shotgun pellets still in his body including one in his heart. During the first half of the race, Lemond had taken the lead by winning the first time trail. Then on the Alpe d’Huez, Fignon attacks and takes the yellow jersey from Lemond. Two days later they race up the mountains at Aix Les Bains and Lemond out sprints Fignon for the victory. On the last day of racing, Lemond trailed by 50 seconds. Only a 25Km time trial would decide who would win the biggest race in the world.  No one could take 50 seconds out of the great multi-TDF winner Laurent Fignon. On that last day Lemond said that he made his mind up that he would ride until he burst. That day he did not burst and he crossed the line, averaging 54.545 km/h,  an average speed that had never been reached on a road race of that time. But the true moment of drama was coming up the road. Seconds later Fignon comes into view, sprinting, suffering with all his might. Trying with everything he had to keep the victory that he had so firmly grasped the day before. He crosses the line and collapses, eight seconds too late. Greg Lemond had done the impossible. He had won the Tour de France on the last day, trailing by 50 seconds with the current world#1 rider starting behind him and knowing just how fast he need to go to beat him.

After the controversy with the legendary Bernard Hinault and after being accidentally shot in the back with a shotgun in a terrible hunting accident, Greg Lemond was the greatest cyclist in the world on that day --A true hero.

This year Greg Lemond gave a very pleasant interview were he said ( in a quiet, fairly humble tone ) that based in his V02 Max of 92 he was one of the greatest physiological athletes that has ever been tested on that measure. He further stated that he beat Hinault, at his best, and that Hinault was one of the best ever.

So I did the math and I know I'm extracting a meaning from Greg's words that are a step farther than he probably meant but .... I think that if you can beat one of the greatest of all time, at his best, then you may possibly be the best cyclist of your day. So let me say that, today, I really don’t like Greg Lemond anymore. I think he has become a media whore that would sell his brother for 15 minutes of TV air time. Is that too harsh ? Yes it is, but I guess we all have that irrational reaction to someone. Let’s omit the ‘Cheating’ discussion here as it gives us all a head ache. The question remains. If Lemond was better than Hinault … If ?! … how does he rate amongst the modern great stage racers?  Hinault,Indurain, Armstrong,Fignon,Roche,Delgado. (AC, too soon ?) ( No Italians, who did I miss ? )

Where does Greg Lemond rank amongst the greats of the modern road stage cycling era, if he had not waited in 85 and had not gone hunting in 87 ?