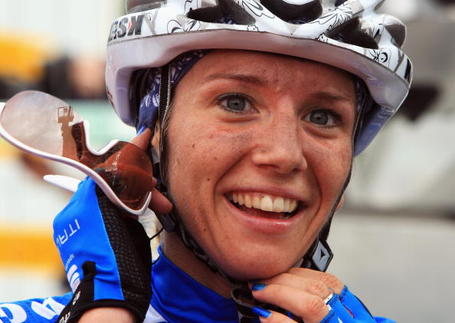 Lots of people were saying during last season that they would like to follow the women’s peloton a bit more closely, but they could never really get to know the individual riders well enough to understand and enjoy the racing. So with the acknowledged intention of slowly pulling away all those slackers’ excuses, one by one, I propose kicking off a series of introductions to the individual teams and their riders. It will even have a certain reliability to it, (though nothing like what you get from Gavia’s Wednesday Comment) in that I promise to deliver a new one as and when I feel like it. So, with a doff of the cap towards the rainbow jersey, the most sought after victory on the circuit, let’s start with Team Valdarno which just today announced that it had signed Tatania Guderzo as its leader.

Note from Gav ~ I'm seriously excited about this feature. And, I found a photo of Guderzo, so I'm bumping this story up.

Note from Chris -- launching this new initiative is one of our major offseason priorities. Huge thanks to Monty for taking it on!

Team Valdarno is a brand new team for 2010 to women’s racing, but they have been around for twenty years as Team Valdarno di Terranuova Bracciolini, an under 23 men’s squad. Sports Director Carlo Montedori has also served as Technical Director for the national junior squad in the past. Riders to watch out for:

Tatiana Guderzo. Duh. Still only 25, but she’s been a classy rider ever since she was a junior with national champion jersies in both track and time trials. On the road she’s rather more often been the one bashing her handlebars in disgust as someone else pips her in the sprint, but with her own team behind her this year that could all change. Also probably deserves next year’s superwoman award for juggling riding and career: apparently she had lots of offers for 2010 but chose Valdarno as it would best enable her to keep up with her other job as a Special Agent in the Penitentiary Police.

Monia Baccaille. The current Italian road champion, her first major result was a very strange third place in the women’s Tour of Flanders in 2005 while riding for the national squad. Since then she’s gained plenty of top five and top ten places but never really been a serious contender for the major races.

Marta Vilajosana. The current Spanish road champion, but the Spanish women aren’t anywhere as strong internationally as their male counterparts. Either that or they just can’t find a gynaecologist. She started out as a trackie but didn’t manage to get onto a professional team until she met her Italian spannerman hubbie. Her website is a must for lovers of cheesy eighties music.

Bridie O'Donnell. The first Australian to appear in these pieces. That’s first as in first of many. Bridie is another decent time trial rider who may possibly have been persuaded to spend her first full season abroad. She’s been cleaning up in the domestic races for the last couple of seasons, but it’s hard to say what that means as half the competition have been away riding in Europe. She’s also a great writer, so I hope that she keeps going with the pieces that she’s been writing for SBS.

The rest of the team mostly come from raiding the ranks of the other Italian teams, with just one new professional in Giulia Bonetti:

It's very much in the style of a lot of the Italian women's teams with one clear team leader, plus support, but the supporting riders are of a slightly better quality. It looks like someone has been going round shaking down potential sponsors behind the scenes to try to give Tatiana a chance against the Cervelo and Columbia juggernauts. It won't be enough for those times she finds herself in a small group alongside Hausler, Pooley, Ryan and Armitstead, but itshould at least ensure that she is in those groups more often than not.