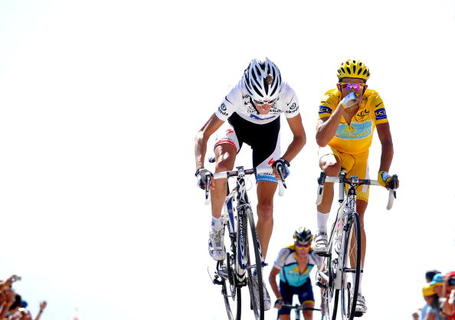 Cyclojournalists worldwide are flocking to Pisa, Italy, in desperation to find some news, or make it if need be, and with no better method for this than finding something to say about Alberto Contador. Sporza: Vino will work for Pistolero. L'Equipe: Contador likes his new armada. Blady blady blah.

Here's an Alberto Contador story worth contemplating: is the 2010 Tour his last great challenge? Consider this: with the backing of a great team, he has looked more or less invincible in his last four Grand Tour starts. A year from now, free-agent Contador will be gathering somewhere with a hand-picked team (Garmin? Caisse d'Epargne?) chosen to launch his assault on Lance's Tour records. That team will not merely be the one who buries him in a pile of cash; it'll almost certainly include the lure of a great support squad fully at his disposal and dedicated to his success in July (and elsewhere). Plenty of things can change over the course of that contract, such as the ascension of a more complete challenger (sorry Andy), but odds are we will see lots of pistol shots and yellow jerseys in that mix too.

The outlier is 2010. Lance is not only back, he has succeeded in putting the band back together, reassembling the aging core of his Postal/Disco/Astana teams at the Shack. He has, in effect, come back to the sport and pulled Contador's support team out from under him. Not unfairly -- Armstrong's accomplishments are unprecedented, and he made a few careers along the way (coughbruyneelcough). But from Contador's perspective, suffice it to say he's lost a lot. The reigning Tour champ now finds himself in familiar colors but with a supporting cast that ranges from familiar (Noval) to novel (de la Fuente) to bizarre (Vinokourov). I don't know who he's getting his training tips from, but suffice to say it's not a DS with fourteen grand tour wins under his belt. Worse, Contador comes off a fall/winter rife with uncertainty, if not turmoil -- the dragged out contract matter, the rush to build a team, all of which is just now being put to rest as training camp begins and the veneer of normalcy takes hold.

Everyone is out to get him -- that's what it means to be on top. And however protected he may feel, the fact is he's never been this vulnerable before, and likely never will again, not in his prime. 2010 will be interesting, indeed.