Best of the Aughts: Classics Studs

Share All sharing options for: Best of the Aughts: Classics Studs 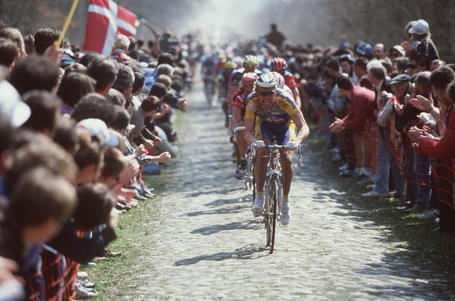 Without slipping into a full-on tribute to the eternal awesomeness of the classics, let me just briefly tick off a little of what makes them so great, and what it means about the riders who contest them, in the hopes that we can crown a Best Classician of the Aughts. First is the ability of one-day races, and all the arbitrariness that implies, to spread around the glory in often cruel and unpredictable ways. We usually agree that the best rider won, but more specifically we mean the best rider on that particular day who wasn't otherwise eliminated by illness, injury or a late puncture. Did someone wake up with better legs? Maybe, but we'll never know. So any hint of consistent excellence against such odds is a huge indicator of true class.

The other big factor to consider is that no two classics are alike. Hell, sometimes even the same race changes from year to year. But although we tend to draw a hard distinction between the Ardennes (climby classics) and the Flemish stuff (thoroughbred grinds), the reality is many more shades of gray. No rider since Merckx is suited to every type of classic, but even among the wildly varied body types, most classics champions can hack it over a pretty fair number of different courses. So while some apples-to-oranges comparisons are inevitable, if Philippe Gilbert can win Paris-Tours and Lombardia in 2009 then this exercise is worthwhile.

One last elephant in the room: doping. Any "best of the aughts" is going to capture a lot of data from both sides of Operacion Puerto, calling into question the value of plenty of results, even those from the unchecked doping era of ten years ago. [I don't subscribe to the theory that a doped win was valid if everyone else was juiced. Too messy.] Ten years from now, this column will be more fun to write. Whaddyagonna do?

So with apologies to Michele Bartoli, Nico Mattan, Alessandro Ballan, Michael Boogerd, Oscar Freire and others, here are the nominees for top Classics Studs from the Aughts. In vaguely chronological order...

For: One of the most successful cyclists of any stripe in history. As a sprinter, he naturally gravitated toward the greater glory of the Tour, whose points jersey should have a Vinoeque picture of Zabel on it. Nonetheless, the Energizer Bunny of German cycling (non-Jens! edition) racked up more than his share of one-day glories in the aughts, hitting a massive career peak from 2000-04 when he never slipped below #2 in the world rankings. And if you think he was just a sprinter, contemplate that he won the Amstel Gold Race along with two MSRs, two Paris-Tours editions, Vattenfall, Henninger Turm, Koln and the German championships

Against: Stated simply, not enough of the big events. The only monument he ever won was MSR. He became famous for just missing out on the Worlds, with a pair of silvers and a bronze medal in a five-year span. Of all the guys on this list, Zabel suffers the most from lack of diverse results, despite the fact that as sprinters go he was a terrific climber.

Bestoftheaughtsbecco Says: Does anyone dislike Erik Zabel? I mean, anywhere?

For: Breadth and number of wins. He won in Spain, Greece, Germany, Austria, Switzerland and of course Italy. He won three of the five monuments -- best in the Aughts -- as well as two Worlds and an Olympic gold medal. He won three World Cup competitions. Of the "climbers" on the list, Bettini is the only one to break through at a significant "sprinters' race," Milano-Sanremo. Even more than the Worlds or Lombardia, he owned Zurich, with four podiums in five years.

Against: Never overwhelmingly great so much as consistently close by, poised to strike. Of the sprinty climbers, if he was ever the fastest I never saw it. Valverde, DiLuca, Rebellin and Cunego have all shown top gears superior to Bettini on most days. He also feasted on late-season stuff, when the competition is thinned out some, and on national team duty, where Italy usually gave him unreal support, possibly out of fear that he was going to go for the win regardless of what Ballerini had in mind. Also, no wins in Flanders (not for lack of effort) and curiously little in France. If it sounds like I'm nitpicking...

Bestoftheaughtsbecco Says: This entire conversation goes nowhere without the Cricket.

For: Good to the last drop (ahem!). Rebellin's consistency was slightly different than Bettini's -- in his narrower menu of races, Tintin was pretty much always in the finale. And if Bettini's finest hours were often in Azzurri colors, Rebellin won regularly and convincingly for an otherwise pretty thin Gerolsteiner outfit. In addition to his great, unprecedented signature trio of Ardennes wins in 2004, Rebellin scored five podiums in Liege, two in Amstel, four in La Fleche and three in San Sebastian... starting in 2000 up through 2009. Talk about consistency.

Against: Unfortunately, there's a pretty good chance he was consistently doped to the gills in these races. Of the guys on this list, only DiLuca inspires less confidence in his integrity. And even if you somehow believe in him, he probably rates as the least diverse climber worth mentioning. No national team success outside of his tainted Olympic medal, but then registering for Argentinian citizenship doesn't usually endear yourself to the Azzurri management.

Bestoftheaughtsbecco Says: His doctor couldn't find anything to get him over the Poggio? Whatever.

For: Seeing is believing. When Valverde wins, he usually blows the competition away with a lightning-fast finish unmatched by any of the Italians. Rebellin and DiLuca each got him once, and Boonen pipped him for the World title in Madrid, but that's about it. Setting aside his grand tour success (off-topic!), Valverde covers a lot of classics ground... pretty much everything but MSR, the cobbles and the truly flat stuff. He ignores Amstel but targets La Fleche (1 win, 1 2nd) and L-B-L (2 wins, 1 2nd) regularly, along with San Sebastian. All this despite focusing mostly on the grand tours.

Against: A little of this, a little of that. He could be #1 on this list if his attention weren't elsewhere. Ultimately, he doesn't contest enough classics to own the decadal title. His integrity is a constant source of questions. I dunno... Nobody here is as much a product of both the pre- and post-Puerto worlds. Valverde belongs in both, or maybe neither. Very confusing.

Bestoftheaughtsbecco Says: Guys like him have no business blowing off MSR. Maybe he and Boasson Hagen can split the cost of a cycling history tutor.

For: Within his element, he's the most dominant cyclist of the decade. On the cobbles he has three Monument wins (Roubaix x 3, Flanders x 2) and a slew of Flemish successes in places like the E3 (four times), Scheldeprijs (twice), Kuurne-Brussels-Kuurne (twice), Gent-Wevelgem, etc. His signature run in 2005 netted him Flanders, Roubaix and the world title. And with five podiums beginning in 2003, he might be the most dominant Paris-Roubaix rider ever before he's done.

Against: His top-end speed has deserted him before he could break everyone's sprint and classics records. The cocaine stuff is irrelevant to this conversation, but it doesn't help that he disappears in late April and isn't seen much afterwards, save for a couple grand tour points successes. Losing to Gilbert on the Ave du Grammont this fall cost him a shot at expanding his resume in interesting ways. And while it might be nice to see him try some of the crossover races (San Sebastian, Amstel), he probably can't win on anything climbier than de Ronde.

Bestoftheaughtsbecco Says: Is it possible to be a little too Belgian? With a few exceptions, most of his wins are at races he could have ridden to from his parents' house.

Johan Museeuw: The Lion of Flanders had a great career, stretching into the Aughts with two more cobbles for his shelf and second at de Ronde. But about those chemicals...

Oscar Freire: How many world titles does it take to get into a conversation on classics studs? More than three, if you're acool, all-round sprinter like Freire who just misses out on the biggest prizes a bit too much.

Peter Van Petegem: Even Boonen sticks around the sport longer than Van Petegem did. Of course, it's hard not to like a guy who hopped out of the Roubaix velodrome showers and started training for the next Ronde. And his signature treble in 2003 (Flanders-Gent-Roubaix) was one for the ages. But there's more to life than cobbled classics. There, I said it. Are you happy now?

Danilo Di Luca: Nobody spent more years of the Aughts winning under a dark cloud of suspicion, which is kind of a tribute to both his on-bike success and the skill of his legal team. Launched with his Lombardia win in 2001, the Killer scored results all over Europe -- San Sebastian, Plouay, the Ardennes and at home. His finest hours were at the Giro, however, and once you start talking about the "pipi of the Angels," it's hard to carry on much further. You broke my heart, Danilo. You broke my heart!

Filippo Pozzato: Pippo obviously doesn't come close to winning the title here, but it's worth noting that he has an MSR win, two Omloops, and seconds at MSR and Paris-Roubaix. He is a consistent threat to win three of the five monuments, and could maybe eek out a crossover win at Amstel, San Seb, or the next two World Championships. When we write the 2005-2014 version of this column, Pozzato could be pretty high up the list.

Alexandre Vinokourov: Not my favorite subject, but Vino wins on instinct and aggression, the kind of skillset that could work just about anywhere. So far that's included just Amstel and Liege, plus lots of stage-race success. And I understand he's been a hit with the preparatore crowd too. Punk.

Damiano Cunego: Cunego is staking a claim on "best Lombardista ever" with three wins in a short time. He has failed in the Ardennes though, other than a single Amstel win, and sadly doesn't seem overly focused on MSR, where he could wind up that closing speed against the right crowd and set the record straight about La Primavera not being a "pure sprinters' race."

Erik Dekker: He'd have made the top half of this post easily had his career lined up with the Aughts. Dekker had a more diverse list of wins than just about any of his peers, including Paris-Tours, San Sebastian, Amstel Gold, and a handful of time trial national titles. Put him on a team with Zabel and Bettini and you've got a chance to win every classic known to man -- multiple times. But as good as he was as a rider, he can't escape his record as a Rabobank strategist for the last three seasons. Ouch!

Random observation: Is it me or does it seem like Milano-Sanremo is the race you have to have on your palmares to win this category?

THE VERDICT! Bettini... by a nose. 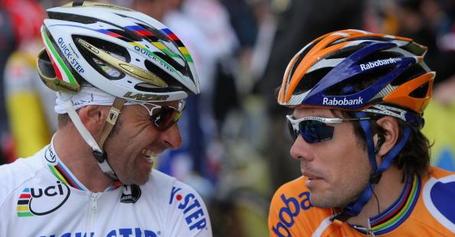