Use this as a live chat. Actual route details shortly. Please say there's a fashion element to this event... Update! Not to rant or anything, but what kind of a sorry-ass grand tour unveils its route without a live gathering of any consequence? Cyclists rarely get out in public for anything fun -- the odd swim shot in Curacao or another November vacation, and these route announcements. This is a precious opportunity for them to show they can don nice threads, accessorize, and gel their hair to look like an American cardinal. And I would think pretty much anywhere in Spain is a perfectly acceptable locale for just such a gala. This would also serve the Vuelta's interests by drumming up a little more attention and creating some buzz. So what does the Vuelta do? Details are sketchy, but I believe they slipped a piece of paper under the door of the Unipublic offices to a waiting AS reporter at lunchtime on a Wednesday. This paper, it was said, contained the URL that the reporter could use to look up the Vuelta route. Feel the drama as the AS reporter manually types in the address -- a situation that just begs for a typo and one of those "get bent" messages that Explorer does so well.

Another UPDATE! Apparently there was a presentation. Some nice suits and whatnot. So I kinda sorta take back my rant. 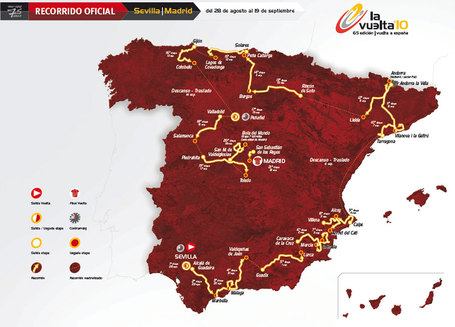