Trainer Time: Teleport Yourself to Italy

Share All sharing options for: Trainer Time: Teleport Yourself to Italy 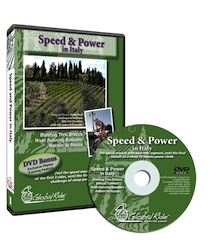 Global Ride is expanding the video trainer montage world to horizons that cycling fans (who hit the trainer) might care about. For example, Speed and Power in Italy starts in Liguria, heads inland to the Bassano del Grappa region, and ends with a climb near Rocca (Abruzzo?). The video shows a few riders out on the road, but mostly points forward, giving you the sensation of being at the head of a long climb, occasionally peering back at your mates... who are either passing on tips about the climb or emitting up-tempo techno music to drive you onward. Another Italy disc, named "Climbing Suffrage," actually starts with a section of the Cinque Terre time trial from last year's Giro, as well as some other uphill drags in la Bella Campania.

I have to say, I am a big believer in visual cues and sound to get you through a training session. Sitting on a trainer is dull, and watching Seinfeld reruns mostly makes me want to get off the trainer and watch on the couch with a bowl of Doritos. Not exactly the ideal conditions for training... so over the years I have relied on a collection of race videos and Computrainer graphics to spur me onward toward a real workout. In the moment, the Global Ride videos are a big improvement on either of those options. Like a race video, you're looking at a real place; and like a CT graphic you are seeing a hill from the perspective of someone about to climb it... usually a good enticement for a rider to kick it up a notch. Here's a sample: 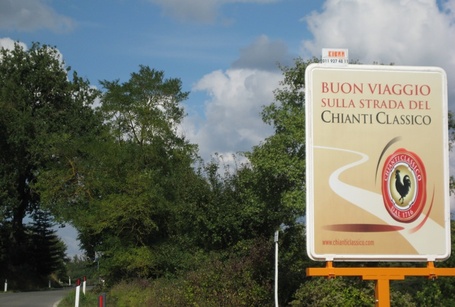 Not a great example, since the road is cut off, whereas on the video you'd be looking at the whole thing. But you get the picture -- it's a real life scene, tailor-made for cyclists. As you're riding, the camera rocks (a bit) with the bike, and you can watch and hear the riders suffering a bit. You cut around switchbacks and attack long straight drags. For being on a trainer, the video certainly invokes road riding.

As for the coaching features and the techno music, the DVD allows you to control these sound options, depending on your taste. I'm for the techno and against the coaching, which seems to consist of reminding you what sort of effort you should be doing. Not a bad thing, but I didn't need it as much as the bass from the music soundtrack. All tolled, it's a solid presentation.

Two other features did nothing for me: the warmup and the pilates class. The former opens the video presentation, and on Speed & Power it's tourist scenes from Venice. I don't find inspiration to warm up from these scenes, though there's nothing wrong with the idea. The pilates class is a bonus feature at the end of the ride, but I am thoroughly agnostic on all things Pilates.

My only knock on the video is the length. I don't know about the Climbing Suffrage edition, but Speed & Power had a total of just over 40 minutes of riding time, over a variety of terrain. Add in the warmup and you're closer to an hour... but that's it. I don't consider that a long ride, and one of the truly limiting factors of an incentive video is repetition. Since the length requires you to watch all of it just to get in a short workout, you're likely to burn out on it faster. Preferably the next wave of Global RIde videos will be in the three-hour length so you can watch one on a longer ride... or watch half the video and not get sick of it as quickly.