Welcome to this week’s edition of the Wednesday Session. Now, with pictures! We have reached the deep abyss of winter, when the news slows to a trickle. It’s remarkably difficult to be funny when there’s nothing much going on.

But fear not, my friends, for it is now December which makes the early season that much closer. Better still, bike racers all about the world have begun training and teams have begun those all-important pre-season meetings, where everyone is assigned a nickname and they work out secret hand signals for when the UCI bans radios. Could actual bike racing be far behind? Training, meetings, if enough bike racers come out of winter hibernation, we’re bound to have gossip. And gossip is good. In the meantime, there’s pictures. 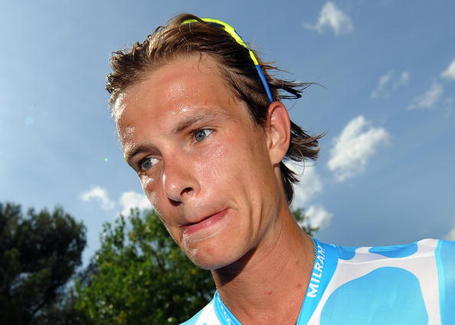 And how about an open letter? Because we do heart those things here at the Cafe.

I know you’re bored. We’re bored too. There’s no cobbles, no bike racing, no podium flowers, and a shocking lack of polemica. It is December after all. Still, that is no excuse for making up fake transfer stories to pass the time. 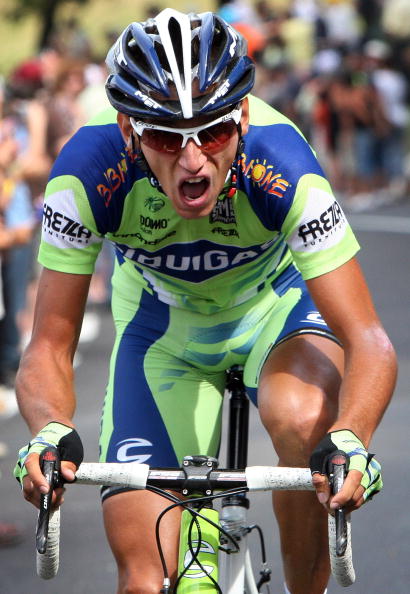 Did you honestly expect us to believe that Roman Kreuziger would transfer from Liquigas-Doimo to Lotto? Because we didn’t. Not even for one Brussels minute, which may or may not be longer than a New York minute. Even Marc Sargeant is denying the story now, which really means it was never much of a story at all, though VeloNews appears to still believe it. Maybe the internet doesn’t reach all the way to Boulder. Anyway, please Belgian press, find something else to do with your time. I’ll even lend you my crayons if you think that would help. You could watch some cyclocross, too. Or, draw with crayons about cyclocross. All that mud, that’s a whole lot of brown crayon right there. Anyway, we’re so over the transfer rumors. Please don’t bother us any further with them, especially if Bradley Wiggins is involved.

Undisturbed by these rumors, Liquigas is in Spain having a little get together and training session. Yes, the calender has turned past 1 December, and all throughout the land of cycling, bike racers must begin again to train. These meet-ups also spawn an endless succession of press releases explaining in painful detail everyone’s objectives for the coming season. Really? Ivan Basso wants to win the Giro? I honestly would never have guessed. Of course, Basso’s team-mate Franco Pellizotti also wants to win the Giro, so this story may prove more entertaining than it appears. In the meantime, the Green Team is training.

Since I can’t think of anything remotely funny to say about this, how about a picture? So much more interesting these stories become if we add a side order of eye candy. Quinziato, by the way, reports that he is pleased with the weather in Spain and is currently reading The Hitch-Hiker’s Guide to the Galaxy.

In other Italian news, Lampre-Vini Farnese still sits in license limbo after the UCI referred their pro tour license application to the License Commission, which sounds like something out of Monty Python. Hopefully, there will not be projectile vomiting. No word yet on what license the team will receive for next season, though Giuseppe Saronni said he would get right on it. 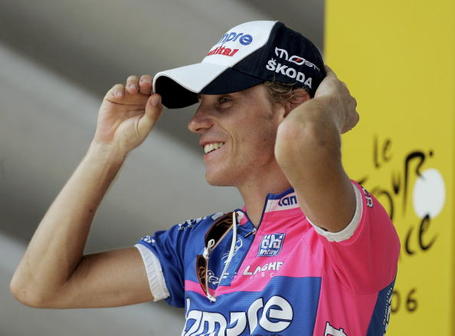 In the meantime, Lampre-Vini Farnese has headed off for a little early season training in Castenadolo. No doubt fun is being had by all, what with the bike fitting and admiring next year’s kit, which probably looks pretty much exactly like last year’s kit.

On the subject of plans for next season, Euskaltel-Euskadi will skip the Giro d’Italia next season and focus their efforts on the Tour de France and Giro d’Italia. This decision opens up space for an additional wild card invite to the Giro. No rumors yet on who might get the nod, but you can be sure that you will be the first to know.

Meanwhile in Spain, the Vuelta a España is planning to open with a prologue in Seville. This plan sounds routine until a look at the fine print reveals that the prologue will be a team time trial at night. Does Nightrider make a carbon fiber model? Does Transitions make night-vision goggles? These are the burning questions of the hour. Prediction: Someone will crash. Watch out for those potholes, kids.

The ProConti team Contentpolis-Ampo, who rode the Vuelta a España last season, will not continue next year. The team proved unable to convince the local government in Murcia to continue their 700,00 euro commitment to the team’s budget. Ampo looks likely to sign on as a co-sponsor to Footon-Servetto, a deal which would bring Aitor Peréz and Mikel Gatzañaga to the team. The deal is not yet confirmed, though, and far be it for me to spread unfounded transfer rumors. No sirree.

In other ProConti team news, the UCI released the list of teams granted Pro Continental licenses for next season. Androni Giocattoli did not receive a license and Gianni Savio is shocked and dismayed. Apparently, there is a problem with the bank draft, but Savio expected to have the situation sorted out pronto. Bbox Bouygues Télécom and Cofidis, meanwhile, join the ProConti ranks from the Pro Tour. I think I need another picture. 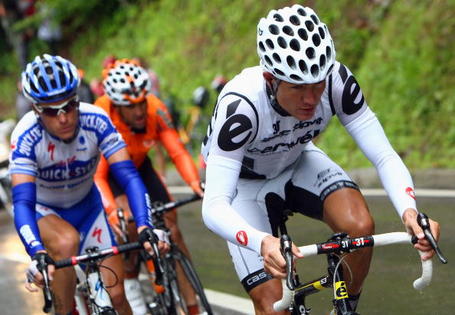 WADA announced today that they are frustrated by the Alejandro Valverde case. Thank you for sharing.

More contract woes for Astana. This time, it’s Oscar Pereiro who may or may not be riding for the team. Apparently, Pereiro signed a contract, but never received confirmation from the team. Yo Astana, you gots to sign the contract too. Then, you haz to send it back to Oscar. See, this is how contracts work. Perhaps the office dog ate it. Anyway, Pereiro had said he would transfer to Quick Step if Astana did not receive a Pro Tour license. 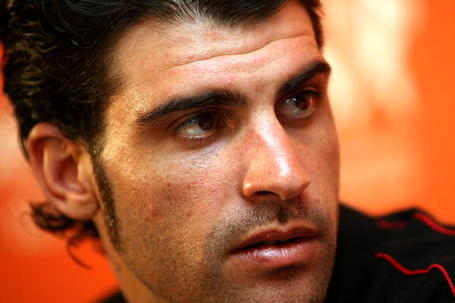 For now, he does not yet have a valid contract with Astana. In the meantime, the UCI has yet to confirm that Astana actually delivered the ginormous bank guarantee to confirm their Pro Tour license. I’m going to pass on the obvious punchline there. No doubt you can fill in the blank. Go ahead, I’ll even leave you some space.

This writing thing is easy. Everyone can do it.

One last tidbit of Astana news, the team will not change names next season, contrary to previous reports. Also, the jersey will look exactly the same. Plainly, Astana knows nothing of about fashion. You have to change the jersey each year. Make it the must-have item of the season. No true fashionista wants to be caught in last year's jersey. The horror! So much these Astanas need to learn.

Alrighty, that's all for this week's edition of the Wednesday Session. More fun on the way in the coming days. Because really, we have to get through this off-season thing somehow. I'm thinking silly is the way to go.