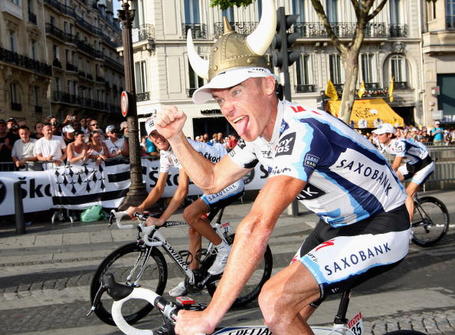 So says Sporza. It sounds as though he'll be OK, just shut down for a few days, but after an autumn where he had to leave training camp when his daughter got ill, and he himself was hospital-bound after collapsing, O'Grady is contemplating whether or not to do the Tour Down Under. O'Grady has a number of results at the TdU, including second last year and an overall win in 2001, so for him to miss his nation's biggest race -- and the Pro Tour points that come with it nowadays -- would be a bit of a blow. Rest up, Stuey.

Photo by Bryn Lennon, Getty Images Sport. And yeah, I know, it's a bit silly, but sometimes you just gotta laugh.