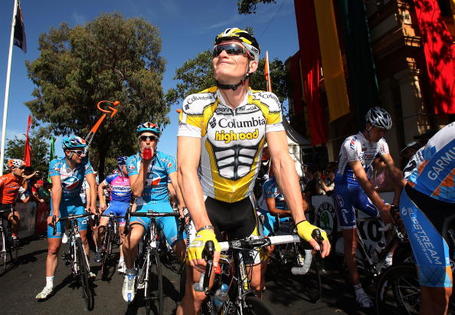 It was early last winter* that Ursula and I and others stumbled into the newly-discovered world of cycling sabr-metrics, examining and tinkering with numbers to unearth certain "truths" about cycling. I started with sprinters, and even managed to show that... wait for it... Mark Cavendish is a pretty fair sprinter. It's been a fun exercise, though Ursula has taken it much further than I have. I'm still pretty much stuck on sprinters.

[* the season between Lombardia and the TdU]

But this tinkering has increased my excitement about sprinters, a class of riders I usually focus on when there are no classics to write about or grand tours pending. Even in the early Cavendish Era, a closer examination shows that there are other sprinters worth paying attention to. Tyler Farrar, for one, in part due to our geographic connection as well as his glittering future prospects.

Next, and equally worthy of some attention, is André Greipel. Second in the world in victories this year, Greipel is better known as the guy who wins sprints for Columbia when Mark Cavendish is otherwise occupied. In early 2008, Greipel burst out of his early-career T-Mobile-induced slumber as soon as he donned the High Road black incognito kit (remember those?), winning more races in Austrialia that January than he'd captured in his top-level pro career to date. As we approach the 2010 Tour Down Under, it seems right to look a little closer at Greipel's performances, and contrast them with his main rivals in Adelaide, Allan Davis and Graeme Brown.

First, let's set the premise a bit better. Greipel and Farrar had similar successes this year, ranking close to each other in victories, points and even deadlocked head-to-head. But they only faced each other in six sprints, for the simple reason that Greipel is Plan B at Columbia HTC, while Farrar is Plan A at Garmin-Transitions, meaning different race plans. Well, results are entirely relative, so while they might make for a good comparison if they faced off more, it's more accurate to judge their performances against riders other than each other. Thus, Farrar vs. Cav. And Greipel vs. Davis vs. Brown.

Greipel, Davis and Brown have gone head to head to head in places like the TdU, Ster Elektrotoer, the Tour of Poland, and the Tour of Belgium. Each is sort of a B-list sprinter in their respective team lineups, either running interference for Cav, Boonen and Freire in July or watching them on TV. However unique they may be -- and I realize their respective focuses aren't identical -- their roles in the peloton are comparable enough for a valid comparison. Which leads us to the numbers...

We should also include the head to head scores. Let's just run 2009.

A few more words about the numbers. "Past" for Davis and Brown indicates that I lifted numbers from this post which lumped 2007 and 2008 numbers together. This explains why Allan Davis can go from 8 "past" wins to 3 wins in 2009 and not see his winning percentage drop. Also, for Greipel and for all the 2009 numbers I eliminated one-day races and only looked at sprint stages in stage races, since this is really where these guys compete. This lopped off a couple of Greipel's 2009 wins, but he has plenty to spare. Oh, and for some reason CQ isn't picking up all of the TdU as "sprint stages," including wins by Davis and Brown. Whatever.

Anyway, the resulting ranking of the three, as stage race sprinters, is pretty clear:

Starting with Brown, the comparison we ran with Davis last year held true in 2009, though he showed a bit more with some minor one-day wins in Belgium, including Nokere-Koerse. He really doesn't beat either of his main two TdU rivals much, but he did nip his countryman for one stage this year. The most you can say about Brown is that, in January at least, he will give the other two a run for their money, but the rest of the year Davis and Greipel will compete at a slightly higher level. Nice bounce-back year for Graeme after a bad 2008, though.

Davis is an example of why points systems are at least as telling as the sprint stuff I am working with here, and why maybe all of it needs to be taken together (at least until Ursula merges them in to a "wins above replacement sprinter" figure). Davis' 2009 numbers aren't radically different from Brown's except for the CQ points, where a few results tell the difference between the respective Aussie closers. While Brown won a handful of races, Davis can look to some secondary placings for serious comfort: fourth in Milano-Sanremo (a race he nearly won in 2007); second in Paris-Brussels behind Matt Goss; and second at the GP Wallonie after Nick Nuyens. These aren't races where you're likely to see Brown on the podium. Bottom line: when Davis isn't crossing swords with the Graeme Browns of the world in stage-race sprints, he's battling the big boys on the one-day scene. And with some success, at that. Moreover, his seasons have been pretty consistent, so look for more of the same this year.

So, perhaps Davis and Greipel, winners of the last two TdUs, make for a fair fight? Maybe in Australia, but on his home course the numbers for Davis aren't actually very promising. He's only bested Greipel three times in the last two years, twice for the win, in the TdU, while Greipel has reeled off six head-to-head wins en route to the 2008 overall title, followed by a crash-out in 2009 that cleared the path for Davis. Greipel has had the benefit of his Columbia mates in past seasons -- best in the business -- though turnover in their leadout team might change things in 2010. For now, if Greipel stays upright in Australia, he's presumably the man to beat.

Comparisons aside, Greipel's 2009 season was nothing short of awesome. A 58.6% winning percentage, for instance, is better than Cavendish in 2008 and Boonen in 2006. Last year Greipel won 11 consecutive sprints at one point, and when it came to finishing top ten or top five, he was practically automatic, averaging better than third place. Again, these are Boonen and Cav numbers. The knock on him would be the quality of the races, but a) you can only race where your team puts you on the roster; and b) he scored four Vuelta stage wins, even beating Boonen, Bennati, Farrar and Freire head to head early on. If the 27-year-old Greipel isn't thinking of what he could accomplish as the top man on another team (say, in 2011), he should be.

One closing note... my rankings of this trio in one-day races, which is a nice reminder that no three riders, even these three, are all that much alike:

Sorry André. Stick to what you're good, maybe even great, at. Who knows, maybe the one-day results are just around the corner too.