Share All sharing options for: Astana May Have Violated French Anti-Doping Laws 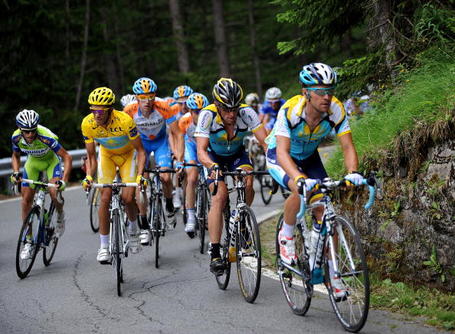 Le Monde reports today that the Astana team of Armstrong and Contador may have violated criminal anti-doping laws in France during the 2009 Tour. According to sources close to the investigation, authorities from the Oclaesp, the institution charged with public health investigations in France, found equipment for blood transfusing in the hotel rooms and wastebaskets of the team. Dominique Pérard, the vice-prosecutor in Paris, has deemed the evidence sufficient to open a preliminary inquiry. This move is the first step in France's criminal law procedure.

Under the anti-doping laws passed in France in July 2008, possession of transfusion equipment is a violation of criminal statutes. The WADA code contains a similar prohibition. Investigators also found syringes and needles in the trash bins and currently, the laboratories are working to identify the substances. In particular, they are looking to see if the evidence includes growth hormone. Investigators also seized anti-hypertension drugs. Though these drugs are not prohibited under French law or WADA rules, they are frequently used in connection with blood doping to combat arterial hypertension resulting from transfusions or EPO use.

So far, investigators have identified seven different DNA sequences on the evidence, suggesting that seven individuals, likely riders, used the seized equipment. The French authorities have not identified the individuals as yet, because they need access to blood samples and DNA information held by the UCI. The UCI has not proved willing to release the necessary information, and French authorities and the Cycling Union have battled in recent months over the conduct of doping controls at this year's Tour. The French charged that the UCI showed favoritism toward Astana and in particular, allowed the team extra time to prepare for testing. The UCI has denied the charges and ill-will between the two organizations continues. Le Monde reports that Oclaesp investigators confirmed the delays granted to Astana, and said that they were "sufficient to allow for the dilution of blood."

The investigation originally targetted several teams, but as of now, focuses only on Astana. According to the information uncovered by Le Monde, the prosecutors found the evidence insufficient to open proceedings against any other teams.