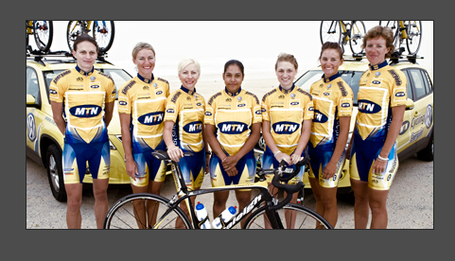 A year or so back some people were bemoaning the absence of African cyclists in the peloton. OK Barloworld was sponsored by a company with South African roots, but they were registered in Great Britain and based in Italy, if you’d talked about the Cape, half their squad would think you were going to the opera. But now an ex-pro named Doug Ryder, has a plan equally ambitious as Dave Brailsford’s, but is taking it slowly, step by step, and building from the bottom. And with women too. There may be a couple of Nords there too (alas I have no pictures of Trine Schmidt swimming with a dolphin), but the heart of the team is solidly South African.

Team Ryder started up about a decade ago and is now the dominant force is SA cycling in both men’s and women’s road racing (and Sifiso Nhlapo has been kicking some serious ass in MTB too); a mini version of the ANC, if you will. Under the name of Team MTN they set up the first SA pro women’s team in 2008, went UCI registered in 2009, racing abroad in China, Canada and at the Internationale Thüringen Rundfahrt, and now have signed up a couple of top level pros in Susanne Ljungskog and Trine Schmidt so that their home-grown riders will have no excuse for skulking at the back of the peloton just to roll over the line at the end of the day. Well they won’t do that anyway, because that’s one guaranteed way to get a tongue-lashing from the boss:

One of Ryder Cycling’s key objectives with this women’s team has been to transform women’s cycling into a more aggressive racing category. The team’s modus operandi is to consistently be on the attack in order to stimulate a more interesting, higher-paced racing scene, which has been hugely successful. As opposed to the past where most women’s races were contested in a large bunch sprint, virtually all the races have ended in splinter groups with high average speeds, ensuring a higher standard of women’s cycling in South Africa.

The comparison with Dave Brailsford and Team Sky doesn’t just stop at the team’s ambitions. Associated with the team is a Sports Science company, Activeworx, led by Dr Carol Austin who seems to be every bit as geeky as Brailsford’s Secret Squirrels (and, sadly, to also feed from the same pot of aphorisms as Johan Bruyneel). Right now it’s hard to to say which of their riders will make an impression in Europe (Twenty year old Cherise Taylor who they seem to think very very highly of missed a lot of last season due to illness and is not on any team list for 2010 that I have seen). Just remember that it looks like they want to win with South Africans, not just to be on the same team as the winner. And if they can’t win then expect lots and lots of suicidal breakaways. I like them already. Here’s a few of those you might notice:


Susanne Ljungskog. Owns one of the best palmares in the business with some stunning results going right back to her third place in the Thuringen Rundfahrt in 1994 when she was but 18 years old. Since then she has won back to back worlds (2002 and 2003) and  Tours de l’Aude (2007 and 2008) and picked up dozens of other trophies and podiums along the way. She may not be in the top ten any more, but she certainly knows what you need to do to get and stay there. MTN could hardly have picked a better team mentor.


Trine Schmidt.The other outsider, and one of cycling’s rising stars. Blogs in Danish, Twitters in English, has a gorgeous terrace outside her bedroom. Her best result last year was surprisingly just a second place in the Chrono des Nations, but I’m sure I remember seeing her a lot more than her race results would indicate. If only I could remember exactly where. I think it’s a good signing, anyway.


Carla Swart. A young rider who has been creating quite an impression on the US college circuit for the last couple of years and won a stage of the Tour of Gila in 2009, it’s hard to say whether she’ll be riding a full season or just the college holidays.


Chrissie Viljoen. Was the first team captain when MTN started their women’s team in 2008, but despite some impressive results in Africa she hasn’t done so well beyond. Still a solid domestique, but her opportunity has probably come a bit too late in her career.


Robyn de Groot. Rode a few times abroad for Cyclelab Toyota which at times seems to be MTN’s main opponent in SA and at other times a MTN feeder squad.

The rest of the team for 2010 is (RSA unless noted otherwise, ages reflect how old they will turn in 2010):
Marissa van der Merwe, 32 years old
Cashandra Slingerland, 35*
Mariske Strauss, 19
An-li Pretorius, 22
Lylanie Lauwrens, 26

* Slingerland does not form part of the UCI Continental team but is part of the squad. I’m not sure why she was left out as she won both the African RR and TT titles in 2008. Perhaps she doesn’t want to race abroad. Cicloweb also list Catherine Hare Williamson as moving to MTN but I’ve not seen any official confirmation.

2010 could be a learning season, but even so expect them to try to focus the whole team on particular races in the season. But don’t be surprised too, if they do a lot more in 2011.

Photo snarfed from the team webby.