Share All sharing options for: Best of the Aughts: Top Five T-Mobile-Related Transfers! 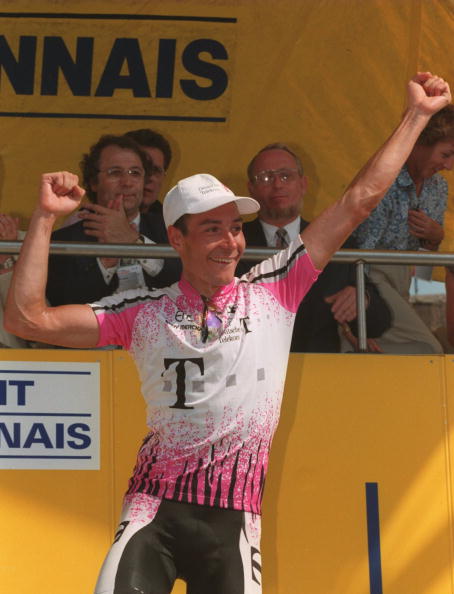 First, the Aughts are coming to a close, and rather than pausing to contemplate the frightening speed at which time slips away, we here at the Podium Cafe will celebrate with a dazzling array of lists. Like, Best Kit or Best Doping Scandal or -- well, not best rider; the point here is to have fun. I understand that Ursula will be compiling the Team of the Decade over "the next couple days," though you could tell from the gleam in his eye (via email) that he wasn't planning on sleeping tonight til that post was done. So that's coming. The Editors have been teased with the subject, which usually means good things. And as usual, there is nothing stopping you, the reader, from jumping on this theme too.

I'm happy to kick things off with one of my favorite subjects: the ever-entertaining talent juggernaut/black hole of Team Deutsche Telekom. Nobody changed careers more dramatically, in both directions, than T-Mobile. From roughly 1996-2004, nothing said simultaneously "you've arrived" and "you're finished" like a lucrative offer from T-Mobile. Of course, T-Mob had much to celebrate, sitting astride the Cycling world most years... Godefroot and Pevenage weren't just off the turnip truck, and no amount of misfires could undo the work of Zabel and Ullrich. But oh, those misfires. Let's break it down. Here, in descending order and with apologies to Bobby Julich, Heinrich Haussler, Serguei Ivanov, and countless others, are the all time top five T-Mobile-related transfers.

Cuddles was in his second year as a road pro for Mapei when he stumbled into the maglia rosa for all of a day, before Paolo Savoldelli (more in a moment) seized control. Evans was an exciting prospect at the time, the first Australian since Phil Anderson to climb with the Big Boys. But he was green, so when he went to Telekom he was hardly prepared to do... whatever it was they had in mind for him. Shepherding Ullrich around the Alps? Leading the secondary Grand Tour team? Not clear. Evans barely raced in 2003 (injured? ill? both? can't recall), highlighted only by the KOM title at the TdU. Which is a sprinters' race. Evans came out fighting in 2004, winning the Tour of Austria, which is notable only for hosting guys who didn't make their team's Tour de France roster. Fourth in Lombardia told of better days ahead. Somewhere else.

Say what you will about Davitamon/You're Pregnant/Silence!-Lotto not backing him up, but Evans found his confidence at the end of his season with the Mob, and rarely ever lost it. Once he flew the T-Mobile coop, Cuddles spread his wings, winning the Tour de Romandie right away and becoming a top Tour contender from there on out. In fairness not all of this is on the Mob, some of it was just timing. But his ranking in 2002 was 29th. Then with the Mob it was 532 and 87. Then he left, bumped up to 35, then 13, then World Number One. If this were an isolated incident, it might be dismissed. It wasn't.

Nothing calls for skepticism like "Kelme 2002" but then T-Mobile didn't end up being famous for its scruples either. So why did Botero plummet from 15th in the world overnight to 377th, as soon as he donned the magenta? A lot of the mystery lies in a lab sample someplace, but a continuing theme at the Mob was the tendency of Godefroot and Pevenage to bring in high-priced talent and get them running bottles up to Der Jan or whoever. In '02 Botero finished fourth in the Tour, won the world ITT title, and won a mountain stage at Les Deux Alpes. He joined T-Mob as Ullrich got sent out, but wound up working for Vinokourov instead. T-Mob invented the concept that you can never have too many quarterbacks.

Getting to the heart of the matter now. Most of the time it was all about Der Jan, the shining hero of German cycling who emerged at age 23 as the next great Tour winner. But even Ullrich's T-Mobile career said more about the Mob rule than the exception. After winning the Tour, Ullrich suffered from insufficient motivation, bad injury luck, and the rise of Lance. It all came to a head in 2002, when an indiscretion involving ecstasy, a car, and some ill-placed bikes got Ullrich his pink slip. So what does an ex-Mobster do? Completely pull his act together and commence kicking ass, that's what. Luck is part of Cycling, so take this for what it is, but the Jan Ullrich who showed up at the 2003 Tour with his patchwork COAST/Bianchi team deserved to win the Centennial Tour. He never quite made up an early deficit that he incurred while battling a virus, blamed on his baby girl. [Kids are germ factories, believe me.] But for the key stages of the Tour, he was on a rampage. He had that look.

Godefroot and Pevenage fell in love all over again, lured Der Jan right back (conveniently, his Bianchi team disintegrated), and covered him with the same old T-Mob stink that smothered his career from 2000 onward. My impression of him is that he couldn't retire fast enough, and only the absurd money thrown his way kept him nominally in the game for a couple more years.

Few team changes in recent cycling history have been more profound than the selling of T-Mobile to Stapleton and the evolution of Team High Road/Columbia. The Mob fell hard and fast in the wake of Operacion Puerto -- which was sad to see. This wasn't merely the team of Ullrich and Fuentes, or however you want to write that chapter. It was Zabel and a lot of other talented German kids too. Their glory days were impressive, but like the careers of the other names on this list, the T-Mobile brand lost its way. When Stapleton bought the team, he put it on the first boat to America, making a clean break from the old Mob and its screwed up history. Time and again top riders transformed their careers simply by leaving the Pev/Gode Mob, so it stands to reason that when the entire team left, they turned into a group that launched a conversation about who the best team ever was. It's not Team Columbia '08 or '09, but just being mentioned is a sign of what the post-Mob era has become. Erik Zabel would be proud. Scratch that -- he IS proud. He's one of their coaches.

The classic example. Savoldelli was a perennial Giro contender, winning the maglia rosa in 2002 and 2005. Guess which two years he was at T-Mobile?

OK, I am piling on a bit here. Sporting the magenta, Savoldelli crashed in training, crashed again into a moto, then broke his wrist, then banged his head. He simply couldn't get and stay healthy long enough to pitch in. Was it the work of a curse? Almost certainly yes. Fortunately, the Falcon got out before it took his life.