Tour of California: The Sprints!

Share All sharing options for: Tour of California: The Sprints! 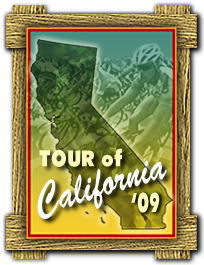 First, to hammer home the message that almost nothing we do at the Cafe is the result of actual planning, I have to admit I have no idea if there will be a GC-related Tour of California preview on this site. We have one loose editorial standard when it comes to on-bike stuff: can you think of a single reason to say anything? If so, type away. Regarding the ToC GC? Not sure. Levi Leipheimer will be all wound up to go. After that there's a class of guys who you might expect to contend (Hincapie, Danielson, the Jacques-Maynes, Phil Zajicek, Landis, Jens!, Cancellara, Dessel, Moos, etc.), and a class of big names who certainly could do well, even if you'd assume they're saving it for later (Vandevelde, Sastre, Lance, etc.). But none of this is of any value unless you can read into the form and motivations of everyone, something rival DS's can't do... so neither can I.

But that's the GC. I can definitely think of a reason to talk about the sprinters. There's a lot of them. They'll be involved. Where exactly, that's another question. Stages 1 and 2 contain some climbing mischief, though not likely enough to detonate the field. Stage 3 has a loooooong, dead-flat run to Modesto at the end, but kicks off with the Sierra Road climb, a plethora of switchbacks, and Patterson Pass... breakaway city. Stage 4 has some later climbing, and while some portion of the race will likely come back together, I'm not sure everyone will make the finale. And after stage 5, the big GC names will completely take over. Here's a list of who to watch:

Martin Elmiger, AG2R: Not a classic sprinter, he doesn't actually win much, but Elmiger knows how to mix it up, and can usually be seen going for wins in winter, ever since he won the Tour Down Under three years ago. Two weeks ago he was inserting himself between Brown and O'Grady, so he should be visible, if not necessarily saluting the crowd.

Thor Hushovd, Cervelo Equipment Testers: Big Thor is back for only the second time, and in his slick new black uni. He's kind of a man for all seasons, with a pretty decent resume of wins in March over the years (Paris-Nice last year, Tirreno-Adriatico previously), so I would guess he'll be stage-hunting already. Thor's last race was at the D-Tour in early September. And the team has a North American sponsor. Do the math.

Francesco Chicchi, Liquigas: B-lister, and not exactly a new kid on the block, but he won his last start, in Australia, and there aren't enough days on the calendar when he's not carrying Bennati's water, so he'll be as motivated as anyone.

Tom Boonen, Quick Step: Needs little introduction. The usual why-isn't-Tom-winning-everything discussion might already be underway, after he bagged only one stage in Qatar. Over the years he's shown a greater tendency to keep the engine from running too hot too soon, leading up to his beloved Classics. Smart move. He won in Sacramento last year, so my forecast for him is that he'll look for a win, and if he gets it, don't expect him to pursue another one. And don't look for him in anything resembling a tricky or dicey finale.

Oscar Freire, Rabobank: Other than a couple Trofeo Mallorca wins, Freire rarely does anything this early in the season. I have to believe he'll look around, see Cavendish raring to go, and decide to just work on his form.

Freddie Rodriguez, Rock Racing: It's been a couple years since he was a factor in the ToC sprints, and this is perhaps too fast a field for him to pick off a win. He'll be looking for an opening though.

Mark Cavendish, Columbia: Well, this is as close to the sponsor's headquarters as Cavendish will get in a race, and he was flying in Qatar (kinda, sorta). He's the heavy favorite on stages 2, 5 and maybe on stage 3 if the peloton soft-pedals Sierra Road, coming as it does in km 15.

JJ Haedo, Saxo Bank: This guy always gets a result in California. Weak field, strong field, undulating stages... doesn't matter. He probably won't steal the show, but I guarantee JJ will bag a result someplace. (Not a guarantee.)