Share All sharing options for: Gear: MyTach Brings On-Bike GPS to the People

This is a product review, so let's kick it off with a crib sheet...

What is it? A multi-function, GPS-based watch geared specifically for cycling. 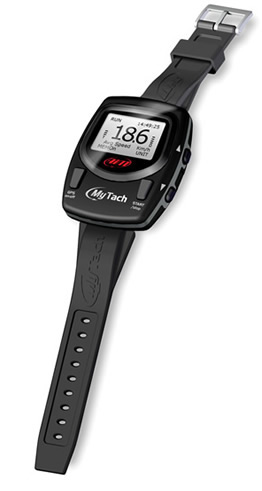 The world is quickly filling up with sports devices offering an array of features: heart rate, speed, GPS services, altimeter, calories, maps, music, Starbucks locator, gaming ability... OK I'll stop. Anyway, the trick is finding a device that has the things you are willing to pay for, while leaving out those you aren't. For runners, this is a snap: for some time Garmin and Suunto have been making an array of GPS-enabled watches starting with HR and adding in speed, distance and laps, in the $200-400 range.

For cycling, however, the choices have been more limited. There are HRMs, and an array of cyclocomputers, but the GPS-enabled ones are more or less limited to the Garmin line of larger, pricier (though excellent) devices. The latter will run you $350 minimum, even before you add in the maps, and not everyone wants to race with a computer the size of George Costanza's wallet.

Into this breach comes MyTach, with a watch device that is GPS-enabled, specifically oriented toward cycling, and can be had for under $300. It may not be perfect, but it's unique and probably close to ideal for those serious cyclists/racers hoping not to shell out the bigger bucks.

Details on the flip... 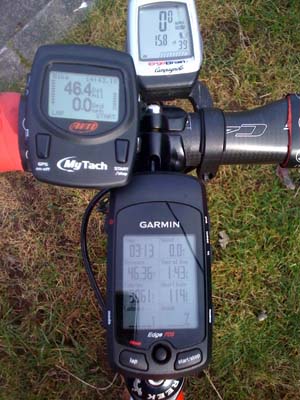 Background: First, MyTach is an Italian company (bias alert!) which got its start in motor sports, and the MyTach Watch can be oriented to running or motorcycling... but I set it up for cycling. I ran two long tests, next to my Garmin Edge, for comparison with what I consider to be the Gold Standard. [BTW, when two devices tell you different numbers about the same event, which one do you believe? What is "truth" in the sports measurement world? Unless you're an engineer, you're probably left guessing, usually in favor of whichever device costs more.] Now, the Edge is a completely different size and price point, so I do not believe in comparing the devices overall. Just the data. And thank you for not critiquing my bar-wrapping job.

What it does: The true strength of the MyTach is that it is a biking watch. Like I said, you can choose to orient it for running or motor "sports", but once you set it for cycling, you have access to an array of data that cyclists generally care about: speed (instant, average, max), distance, altitude, time (elapsed, stopwatch, clock), slope, and various ways to cherry pick data: lap settings, alarms for when you exceed maximum or minimum thresholds, and automated lap-counting for each time you pass through a fixed location.

The displays are another big plus. You can set up the display screens with any 1-4 items you want to see, and you can do multiple pages as well. For example, you could put speed, distance, time and avg speed on page one, as your basic data. Page 2 could be for laps, showing lap speed, distance and average. Page 3 could be for climbing: speed, distance, altitude and slope. And so on.

Finally, the MyTach connects to a PC through a USB connection, and by downloading the software you can conduct your workout analysis. I am not especially savvy about this, so I can't explain this competently, but you can see some of the screen displays here. The last one is your ride superimposed on a Google Earth topo image, which I find particularly clever and fun, especially if you live near, say, Alpe d'Huez. Anyway, I downloaded the software, connected the device, and got my data off the watch, all of which was perfectly simple to do. [Not Mac-compatible yet. Boo...]

Satellite Accuracy: None of what I've said so far would mean anything if the numbers didn't more or less tell you the truth. So I very carefully ran the device simultaneously with the Edge to see if there was much daylight between the readings. This is where the MyTach impressed me. This is how the MyTach compared to the "Gold Standard":

What's missing? Heart rate. I looked around for the HRM, but the MyTach doesn't seem to be HRM-enabled. This is kind of a surprise, and maybe one of those details that didn't translate from the running or motorsports world. Now, in cycling everyone knows watts is the best measure of work, but that's a different price point. Heart rate is the budget alternative, with HRMs starting on eBay at $10.99 (not a typo). It's an effective training tool, to say the least. But the MyTach uses speed as the measure of work. I won't say this is totally lame: if you live in less variable environments, speed can be useful. When I lived in DC I used to do Haines Point laps, a flat lap with few cars and its share of windless days, and speed was good to know. Heck, even in Seattle, for a loop of 50 miles or so your average speed will tell you something. But Seattle is urban, riven with hills, and affected by winds that are literally all over the map, so instantaneous speed is just a random number.

I don't know why they left it off, but they need to add it to MyTach 2.0. HRMs are incredibly simple, particularly compared to the other functions this watch performs. I'm pretty sure my kid's primary school class is building an HRM out of found objects from Shilshole Bay. Get this done, MyTach. If they don't, it's still cheaper to buy a simple HRM and the MyTach than to buy a Garmin device, but the benefit of a single device is obvious.

Final analysis: HRM thing notwithstanding, the MyTach is a terrific value for cyclists. Even though I own an Edge, I will most likely race with the MyTach. It's smaller, and since I didn't lay out $600 or so I am less concerned about the effects of crashing. Actually, given its size it would probably survive the crash anyway. I'll prefer the Edge for training, and I won't do time trials with the MyTach since the one and only number I care about is heart rate. But the MyTach is a breakthrough in the GPS-device world for us, and with a few tweaks (HRM and Mac compatibility) it really could be great.