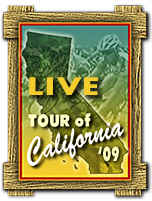 Another day, another big ol' ball of intrigue. I guess I'm already on the record calling for a successful breakaway, but given the profile of the first third of the stage, I suppose anything can happen. If this race were later in the year, Sierra Road would have a big banner with the word "FINISH" on top. For some pre- visuals, check these pictures out from 1996.

The other big feature of the stage is the ATOC's first-ever Central Valley stage finish. Modesto is farm country, or maybe cattle... in any event, it's a long way from Peets in Sausalito. It's also a long way from Sierra Road, so if the race doesn't overheat in the first couple hours, we should see a real bunch sprint, which I wouldn't mind.

And before we carry on with the "it's over" thing, here's a list of some names among the 15 riders within a minute of Levi Leipheimer on GC: Mick Rogers, Dave Zabriskie, Lance Armstrong, Thomas Lovkvist, Vincenzo Nibali, Oscar Sevilla, Jens!, Ivan Basso, Robert Gesink, Paco Mancebo, and Tom Danielson. Game Not Over.