Volta ao Algarve begins wednesday in a sunny week unlike last year and ToC these days. The race finish Sunday, and return too a model that the last i remember was when...imagine, Floyd Landis’s won in 2004. I was there to see Armstrong and his "armada" (Azevedo, Hincapie) when Landis won the stage that finish in a 2, or 3km uphill named "Alto do Malhão". Landis took the yellow jersey too from Armstrong, who won the ITT the day before. So looking for this year the race will be complete what pleases the Portuguese DS, unlike 2007 when Petacchi won the general classifications and 3 stages, and last year was Devolder when won the ITT (and GC) and rest in the others flat stages.

In January there were rumors that Eurosport would follow the race on live, but this will not happen, which is a pity because I think the race could be very exciting and would be very good for tourism in the Algarve, the main activity here.

This year the race begins with two flat stages, that in recent years the final has been in a bunch sprint. In friday will be the stage that finish in "Alto do Malhão" and could be decisive because here we have ITT specialists like Grabsch, Millar and who don’t want guys like him could discuss the GC, will have to attack in that climb and take some seconds. Next day is the ITT that likely will determine the GC winner, a flat 33,7 km ITT that Stijn Devolder won last year despite the shortening of that stage due to rain. In last day the riders will pass through the "Serra de Monchique" and like last years will finish in my hometown (Portimão), probably in a bunch sprint.

Looking for the startlist is a dream como true...lol 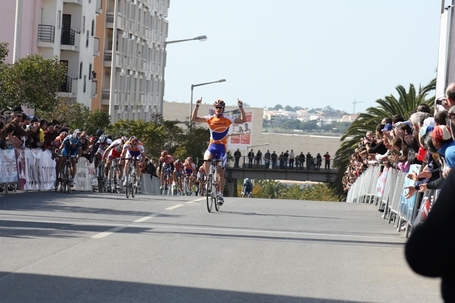 (Theo Bos won last sunday in a bunch sprint, his first road race in the opening classic of the portuguese calendar.)

For GC there are many riders capable to win the race. Despite the status, the shape in this early season could be the main factor but cleary the winner have to do a very good ITT on Saturday. So, looking for startlist Contador and Cunego are the big names, Devolder (winner of 2007) is still recovering of a knee injury and maybe isn’t able to do the same this year, but this may not be an impediment for a QuickStep win, my instint tell me that Sylvain Chavanel will be the winner this year. In Astana, Contador already said that his shape is still poor and Kloden and Paulinho have liberty to gave Astana two GC wins in the same week (if Levi win ToC too :P). Looking for other dark horses for GC there are: David Millar, Maxime Monfort, Tony Martin, Markus Fothen. In Portuguese teams: Hector Guerra and Ruben Plaza from Liberty Seguros, David Blanco (Palmeiras Tavira) and Tiago Machado (Madeinox-Boavista) could do a surprise.

There are other names that could take a stage, many classic especialists are here training for Het Volk (ups, the name has changed...): Philippe Gilbert, Maaskant, Van Summeren, Bert Grabsch, Burghardt, Niki Terpstra, Toni Colom, Sandy Casar, Hammond, Klier, Gerrans. I hope that this last three (Team Cervelo) will be active like they did in Tour of Qatar.

So many great riders and I’m thinking to buy a bigger memory card for my camera. I will go to Tavira in Saturday to see the ITT and riders to warm up, and maybe i’m go to see the arrival in Lagos (2th stage).