It's easy to forget that cyclocross is a team sport, as tactical as any road race you will ever watch or ride. At first glance, cross looks like a mountain bike race: Everyone lines up, rides hard, and the strongest rider wins. Simple, right? Not so, especially at the elite levels. Sunday, the Dutch women put on a clinical display of team riding, and showed just how tactical elite-level 'cross truly is. The Dutch won the rainbow jersey with the fastest, though not necessarily the strongest woman in the race.

The first move came from American Katie Compton, who rode hard off the start and quickly built up a gap over the main field. Did Compton make the right decision to go so hard so early? Patience might well have served her better. Imagine, for example, if that big move had come late in the race. But Compton chose to stake her claim early, hoping that she had the legs to hold off the world's best for the length of the race. It very nearly worked, and certainly ensured her podium placing. By laying down a torrid pace, Compton made the race, forcing the selection behind her.

Why did Kupfernagel pull one of the fastest finishers in women's cycling to the line? In all her experience, which includes nine world championship medals in ten years, Kupfernagel must have known how it would end. In her post-race interview, Kupfernagel explained, "After the Compton's attack, I had to go after her - even with Vos on my wheel. That was my only chance for a medal, even when I knew that I would not be able to win the finishing sprint." 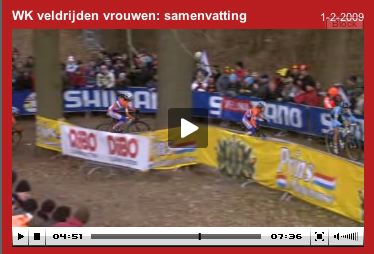 Compton's early move left Kupfernagel with few good options. The German is no sprinter, and could not risk a big group coming to the line behind Compton.

Like the American, Kupfernagel needed a hard race. Even towing Vos along behind her, Kupfernagel still bettered her chances by riding hard rather than sitting in. She could not wait for the finish to make a selection, she had to make it early. The Dutch rider did nothing to contribute to the chase. Vos commented after the race that she was not good at the start. "I could hold Hanka's wheel, but I could not in the beginning do anything more." The chase was up to Kupfernagel.

Even after Kupfernagel caught the flying American, she continued to drive with Vos following. Here is where the strength of the Dutch team mattered. Behind the leading trio, three Dutch woman sat in the chase group. Mirjam Melchers-Van Poppel soon set out alone to bridge to the leading group of three. The effort by Melchers-Van Poppel made it impossible for Kupfernagel to relax the pace or attempt to force Vos to go to the front. If the Dutch woman came across, both Kupfernagel and Compton faced an even worse scenario than going to the line with Vos alone. Allowing Melchers-Van Poppel to catch would all but ensure a Dutch win. With a team-mate chasing behind, Vos could sit on. Despite the strength of both Kupfernagel and Compton, the Dutch women held the tactical advantage much as they did in 2006, when Daphne Van Den Brand chased to within seconds of Kupfernagel and Vos in the closing kilometers. There, too, Kupfernagel had no choice but to ride and hope that somehow Vos failed in the sprint. In bike racing, it is sometimes necessary to tell oneself little lies.

By riding hard early in the race, Kupfernagel and Compton fought desperately to avoid a sprint finish. The combination of Vos's strength in surviving the high speed chase and the pressure created by the Dutch chase behind the leading group doomed their efforts. With her cool head and fast legs, Vos easily jumped free to win the sprint. Thanks to the strength of her team-mates, she arrived fresh at the finish. And thanks to her talent, she made the most of her chance and won her second 'cross world championship.