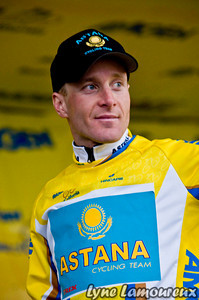 The current leader of the Amgen Tour of California  American Levi Leipheimer (Astana)  is hoping to make it a three-peat as he goes into the decisive stage, the 15-mile (24-km) time trial in Solvang.  Last year, Leipheimer put in a blazing result beating second placed David Millar by 20 seconds.

I had a chance to talk to Leipheimer during the Astana team training camp held in his backyard, the city of Santa Rosa and the county of Sonoma.

Getting better with age.  At 35 years old, Leipheimer thinks that he's become stronger not only physically but mentally as he's grown older.  With age has also grown  his appreciation of training and of cycling.

"I really enjoy my training, I enjoy going out and riding for 6 hours and  really kind of suffer on the bike because it makes me feel like I'm alive more so that any other place to be, out there spending five hours on the bike, pushing hard in such a beautiful scenery like Sonoma County. I think that over the years I've just been able to appreciate that more and that's been the positive cycle that helps me train harder and harder and as I get older I'm able to handle more of that. "

A good time trialist needs to be tough mentally and typically that is learned through experience.

"You need to learn how to push yourself, it's easier when there are other riders around and they are pushing you but when you are by yourself it is definitely much more challenging. I've lost a couple of time trials by fractions of a second and so the next time, you tell yourself you're not going to lose by a fraction of a second again. It comes down to how hard you can push yourself, never letting  off the pedals."

Learning to be tough mentally has been trial and error for Leipheimer, a long process of learning through the years of racing and making mistakes.

"I've dedicated my life to cycling and I've made a lot of sacrifices. I've made mistakes and I've learned from those mistakes but certainly there are ways to help people, to teach people those mistakes so they don't make them as many times, everybody has to make mistakes." 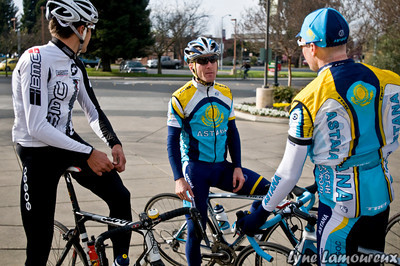 Teaching others. For the last few years, Leipheimer and Scott Nydam of the BMC Pro Cycling Team have been training  together in Northern California.  For Leipheimer, Nydam is the ideal training partner. "He's such a great guy, he's humble,  he has a lot of motivation and enthusiasm for the sport, learning very quickly and he pushes me and I push him and it's this great synergy."

Leipheimer credits his and Nydam's great rides at last year Tour of California to their training partnership.

"Getting out the door every day to meet each other and to share that pain and suffering it takes to get into shape and compete. Last year we both came into Tour of California and we both had great rides, and it's because of all the training we do together."

"I've got to say that I've really enjoyed the last couple of years training with him and I'm lucky to have somebody like that to train with. It's fun to be able to teach someone like that what I do, the little bit that I do know to help him out. "

Dealing with fear. Crashes and injuries are often part of the game for professional cyclists, and sometimes fear comes into play.  Leipheimer admits to being scared many times on descents in the Alps, the Dolomites and the Pyrenees, and  sometimes risks must be taken to stay with some of the riders.

"Some of them are crazy fast downhill and I think  they don't have a brain or something, they're not thinking." said a smiling Leipheimer.

His philosophy is not to take unnecessary risks and that it is better to be dropped on a downhill , to lose some time than to crash.

"But there are times where I'm riding at the limit just trying to stay in a small group like last year at the Giro, I can remember descending in a group with Paolo Savoldelli.  It was incredible following him on roads that he knows  in the rain, a 20k descent where you just don't think about what can happen because if you do that's a negative thought and that's going to lead to something. There's definitely some fear there but I try not to take some risks that are unnecessary."

About Astana. The 29 riders of the Astana team come from  9 different counties but for Leipheimer that doesn't matter as it's all about being professionals.

"What matters is how professional of a bike racer everyone is, whether is someone from Spain like Alberto or an American like Lance or Chris Horner, you're talking about the world's best professional cyclists and then they set an example for the younger guys from Kazakhstan or Lithuania."

The return of Lance Armstrong and the increase of media attention is all positive for Leipheimer.

"We need that, it's tough times and it's great for our sponsors, it's great for our team. It couldn't be any better, he's such a positive influence on the team.  We have some of the best professionals in the world, Alberto, Lance, Chris Horner, just to name three and it sets an example for the rest of the team, it brings that level of professionalism up for the rest of the team."

After the Tour of California, Leiphemer's next goal is the Tour de France.

"A goal of mine is to be a good team mate and possibly get a good result for myself. Just be the best that I can be in July." 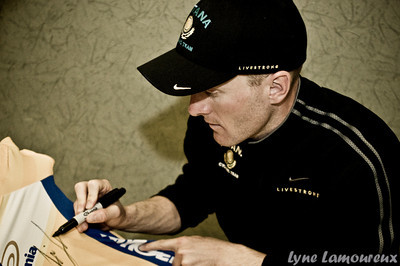