Notes from the Sidelines

Share All sharing options for: Notes from the Sidelines

First time playing journalist today. One of the truly triumphant elements of the citizen media movement is that when one of our representatives (e.g., me) wanders into the peloton with a press pass, there is no real requirement to behave like a regular ink-stained wretch. I don't have to hide my star-struckedness; if I don't pursue a searing line of questions, I'm still more or less "doing my job." It's all a matter of what standards you feel like assigning to yourself. Or, you know, not. 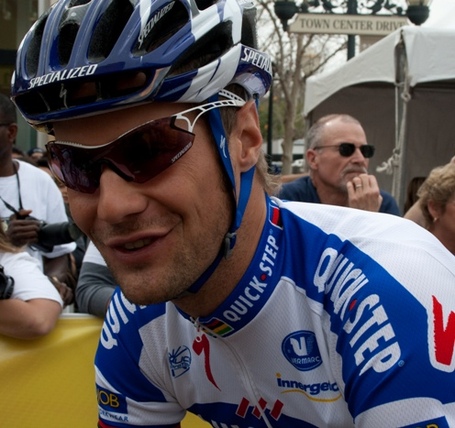 Anyway, I played journo today with one basic mission in mind to help me focus on my maiden voyage: ask the riders when the ATOC has reached its limit as a training tool and passed over into an inappropriate early-season death march. The Tour of California's genius is its ability to be just enough and no more than what anyone wants this time of year; as excited as we find it, to the riders it's very, very early.

The consensus (Boonen, Hincapie, Horner, Danielson, maybe one or two others) is that it's getting close to the limit of what anyone wants to do in February. Boonen was particularly adamant about this being the limit. Everyone said it's a hard race. Danielson added that pretty much any race in February is going to be hard, but he can say that, he's a natural climber. On the flip side, it's a race you can't say no to, because guys would rather be racing than in a camp, and it's the only race in town.

First, a couple shots, though I'll do more of a gallery later. The future of cycling (which is now, yo): 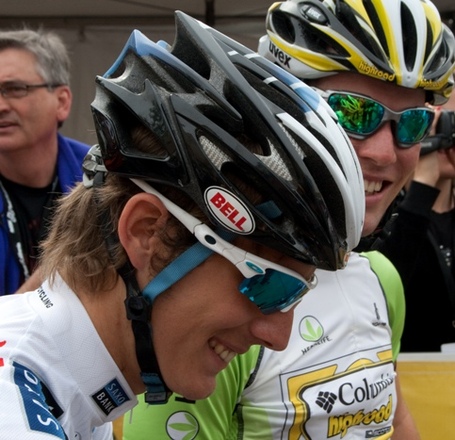 Also, this one's for Dan: 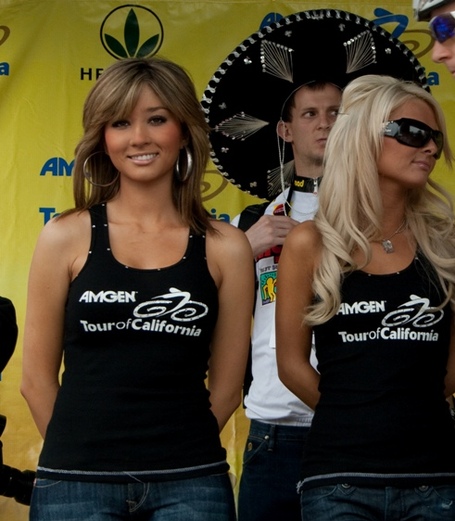 It wouldn't be California without some Cali babes. Anyway, I don't have too much to add to the whole start-of-the-race scene that you haven't heard before. About the only truly original experience today was the fact that in Santa Clarita you can leave your car keys on the trunk for two hours and still find your laptop where you left it. Also, driving around Cali with the tourtracker playing through the soundsystem was inspired genius. But anyway, it was a great day, a great experience, and just really cool to get up close and personal with the European peloton.

Oh, my other ambition was to ask Boonen what difference the Eikenmolen made in the Tour of Flanders, but I got too frazzled and couldn't remember "eikenmolen." I also forgot my abition to talk with Jens Voigt. I also realized that, while I can tell you how Vincenzo Nibali is progressing as a rider, I can't recognize him when I'm standing next to him.