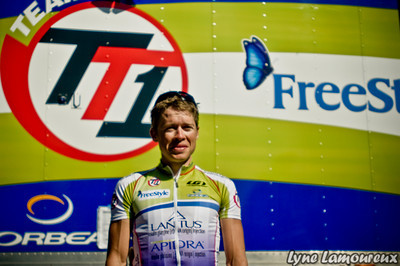 Team Type 1 co-founder  Phil Southerland was diagnosed with  Type 1 diabetes at seven months old and has been racing off and on for the past 12 years. I chatted with 27-year old Southerland at the team training camp in Solvang last weekend.

A bit of background. I first met Southerland at the Redlands Classic last year in March as the team was starting its first NRC race ever and he gave me the lowdown on the creation of the team.  During the college days, Southerland noticed that his friend and Team Type  1 co-founder,  Joe Eldridge was  not taking care of his diabetes and started placing bets on whomever had higher blood sugar paid for dinner.

"He [Eldridge] was a beginning bike racer, like a cat 5, but he was pretty competitive so he started doing things better, we call it the A1C challenge now, so in three weeks he made some drastic changes and all of a sudden he started beating me." said Southerland last year.

Avid cyclists Eldridge and Sutherland created Team Type 1 in 2004.  In 2006 and 2007, the duo  captained Team Type 1 to back-to-back victories in the eight-person team division of the Race Across America (RAAM).  After being able to use the best technology in the diabetes world, Southerland and Eldrige put forth a goal: to take Team Type 1 to professional cycling’s greatest race, the Tour de France, by the year 2012.

"That's the goal of the team so we can get that, try to have a worldwide, global impact on people with diabetes, similar to what Lance did for people with cancer." said Southerland.

Now onto the present.  Team Type 1 is growing again to  include a triathlon team, a development team, a women's professional squad and a second team for RAAM: "Team Type 2"; all in addition to the Men's UCI Professional team.

Hi Phil, how are you?
Phil: There's been some change, a little bit. Change for the better. A little bigger now, a little stronger now.

A little bigger? It's like 3 teams (laughs)
Phil: 4, 6. I lose count. (smiles) It's a lot bigger but it's allowing us to get out there in front of more people, talk to more doctors, make a difference. On the women's team, we've got the first two Type 1 diabetics in the history of women's cycling. I'm kind of real excited about. Most teenage girls with diabetes don't have role models to look up to and now we have two phenomenal examples out there.  Then the men's team, the depth this year is so much greater, we should be able to win a lot of races. Everyone has gelled really  quickly at camp, riding well. It showed yesterday, even though it was a small local race, I've seen massive team show up at a local race and get second and third, we didn't play that game.


No, you got first and second.
Phil: That's right (big smile)

Tell me how your year went last year, the first year that  Team Type 1 was in existence.
Phil: Personally, it was … on the bike, not a good year, on the business side it was a good year. I got diagnosed, thanks to Ian MacGregor actually, with iliac endofybrosis at Redlands and so shortly after that, I went up to see the doctor and five days later I was having surgery. So that put me off the bike for seven weeks total and after that it was trying to get the business sorted that so we could have this team again next year. So I'd get to train for four days and then I'd be on the road for four days. I tried some racing coming back but without having the time.... so out of shape trying to get back in that it was not possible. It allowed the time to talk to all our sponsors, talk about the expansion and I asked for certain support and they gave a certain support and here we are. Come November, this past November, I cut off all travel, it was just focusing on riding. 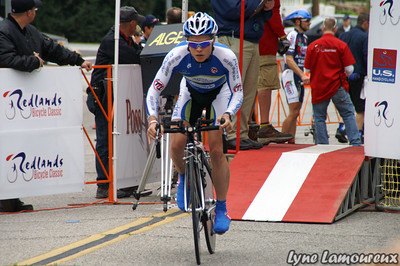 Is it?
Phil: I think I trained a bit too much coming into camp and then dug a hole and didn't get to recover that way I though I would during the photoshoot because it was some crazy ridiculous hours. Then I just dug a little bit of a hole riding with the best in the country for the past 5 days, it's been great to see just how strong the team is. I got to keep  reminding myself that these are the best of the best. Just be patient. I've got a good coach in Vassili, he's been helping with my program and I'm motivated, now I've just got to get back from camp and recover, let everything from the last two weeks sync in. And then one more tuneup next week down in San Diego, the Boulevard Road Race and then race with the big boys.

Two weeks to recover and then the Tour of California. Are you ready for it?
Phil:  The team is ready. For me, I've never raced at that level and caliber. My teammates that have done the Giro d'Italia, the Tour de France have told me how hard of a race this is going to be so I don't know but I feel that I've done the training, I've been smart about... I've made the sacrifices. At least, I'll be able to look back no matter what happens and say I put my one hundred percent effort towards it and that's what we can do. With that being said, do I want to get through this race and do something, be on the camera at the front of the race? Hell yeah.  There is no point in lining up if you don't think that you can achieve something in the race.

Are you finding that your body is responding or not responding the way you thought it would during this hard training period?
Phil: It's been tricky. There have been... I used to have a pattern and I knew what to expect out of  the pattern. I would go to a certain point and then a transition would happen, I would go another way and transition that, I could anticipate but this year, the training has been much harder and the body has been doing different things. My metabolism during the day when I'm on the bike, I need a certain amount of insulin, the middle of the night I need more insulin. I do Lantus which is a  basal rate insulin and I figured it out now, it's just that I have to wake up once, sometimes twice a night to give a small injection of Apidra because the basal rate I need during exercise is different than the one I need post-exercise. Has it been challenging? yes but  I'm figuring it out.

I'm breaking new ground here, it's forced  me break new grounds in the diabetes world which is exciting. I'm talking with Howard Zisser  who  is one of the top researchers and endocrinologist in the country if not in the world, explaining everything I'm doing and what is going on and he's like just don't try to figure it out because you won't be able to. He's been working on implantable insulin pumps  and curing diabetes but he doesn't know what's going on in my metabolism.   We're breaking new ground, paving the way so that future people with diabetes can  have an easier entry into the sport.

I know that you have a long-term plan for the team and aiming for the Tour de France. What's the target date again?
Phil: 2012

What's the goal for the team this year and for you personally?
Phil: Well for the team, it's win races. If you win races, you have an opportunity to share your story. We have a lot of guys that can spread the message of the team and show what exercise does for people. And then for our Type 1 guys, show -  if you use Lantus, if you use Apidra, if you use FreeStyle  Navigator technology  - what you can do with this disease, you can achieve your dreams. Personally, I want to help the team out, initially I want to get through California and from that point, begin to win races. Whether it's leading out Ian MacGregor on a sprint finish up a mountain, or whether it's an early breakaway, something where I can consistently add value to the team. I'd like to win races and that's what I used to do before I took off in the business world, and it's something I'd like to continue doing.

Are you getting a lot of people contacting you?
Phil: All the time.

All the time?
Phil: Like I said, this Dutch has been winning races at the elite level and he's got a contract with an amateur team, doing well and we're hoping to get him for a couple of races this summer, Martin …. and then Matt Wilson talked to a Spanish rider with Type 1 and he's pretty talented. So it's just, to me, working with the talent pool that we have but also going out to different countries, different areas so we can really make this a global effort.

Phil Southerland will be racing with his Team Type 1 squad at the Tour of California. Follow him through his twitter and/or blog.