Five Things to Know About Tirreno-Adriatico

Share All sharing options for: Five Things to Know About Tirreno-Adriatico

Le Due Mari gets underway tomorrow morning, which doesn't leave much time for me to write -- or you to digest -- a proper preview. However, it's also March, so there is only so much you need to know about the overall contenders... which is to say, there isn't much to know. Still, some takeaway points:

1. The overall winners in the past have ranged from a classics-sprinter type like Erik Dekker or Oscar Freire to climber-types like Andreas Kloden or Abraham Olano. Last year Fabian Cancellara won. Translation: it's usually there for whoever really wants it. But this year's edition is packed with climbs, so draw your conclusions accordingly. For stage info, the race organizers have created a fabulous website, with graphs of the stages and ultimi chilometri (finishes). And a killer logo: 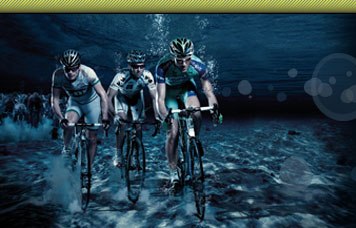 2. The highlight will almost certainly be Saturday's stage to Montelupone, a friendly little jaunt over some gentle little 21% gradient slopes. Twice. Check out the Steephill TV photo gallery from last year's ascent. That said, at last year's stage the time gaps for the top thirty were all within about a minute.

3. The route is a mess, nothing like a traditional race from the Tirrhenian Sea to the Adriatic. But modern Italian stage racing is all about long transfers, and this one doesn't disappoint. Anyway, you could sum up by saying the first three days are sprint days (Boonen vs. Cavendish vs. Bennati vs. McEwen vs. Ciolek), followed by a nasty bus ride, followed by some serious, serious spring racing.

4. In all likelihood the race will be decided on the stage five time trial, 30km from Loreto to Macerata, including a fair amount of uphill. A shorter version last year (in reverse) produced time gaps twice as large as Montelupone. Still, if it's close, stage 6 finishes on a long uphill drag, including a final km in the 9-12% range.

Feel free to fill in the lack of analysis. If nothing else, the presence of some real climbing has drawn the attention of the Ardennes set, which should make for some nice attacking. Too bad Cancellara isn't fit at the moment to defend his turf, though this opens things up more for Andy Schleck. My pick?? I'll go with... Lovkvist.