[N.b., Google Translations says Lupone = Questionaire, but that can't be right, particularly where the wolf (il lupo) is the mother species of Rome.]

The spectacle of Montelupone is similar to last week's Strade Bianche Eroica: a new cycling destination that nonetheless seem far larger than its own sporting history. As far as I can tell the pro peloton hadn't seen the 21% gradients approaching this old Marche region village until last year's Due Mari, the results of which you can scroll down and watch, in horror. That a race can take on such dimensions as a youth is a nod to one of the sport's essential values: spectacle. What makes cycling so great is the idea of the world's best athletes trying to power a bike over terrain that is unthinkable to many of us, even better if the visuals are beautiful as well. Such feats make the imagination soar and send us tifosi to our knees in awe. So Eroica and Montelupone may not be important places on the cycling calendar, but the considerable buzz they generate gives them a different, equally valid importance.

After tomorrow's race representatives from Huy, in Belgium, will have a small sister-city commitment ceremony with the Montelupone town fathers, and herein lies the importance to the riders. Huy and Montelupone aren't just cities on a hill; they are finish lines in the cycling world, and Huy happens to mark the end of Fleche Wallonne. If you see a lot of names tomorrow that you would expect to see at the conclusion of La Fleche, it's no coincidence: this is a big-time dress rehearsal. According to the Killer of Spoltore (Danilo DiLuca), Montelupone is a tad more difficult, owing to its nearly 2km length, while the Mur de Huy is 1.3km. The fact that we're fully six weeks from La Fleche might also be relevant. But expect fireworks regardless, as the Ardennes climbers will all want to revv up their engines.

OK, so you know I hate profiles, and this is no exception. The road to Montelupone is not a vertical cliff. Still, you can see the numbers and figure out what it is: a beast. 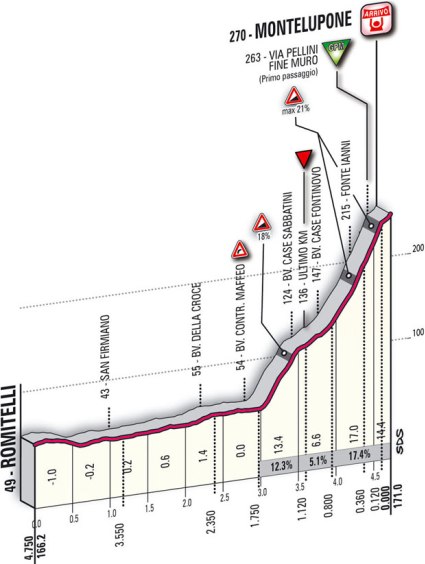 As for last year, here ya go.

Don't miss this clip either: a dashboard video driving up to the piazza, and listening to very cheezy Italopop.