Milano-Sanremo: From Turchino to Poggio

Share All sharing options for: Milano-Sanremo: From Turchino to Poggio 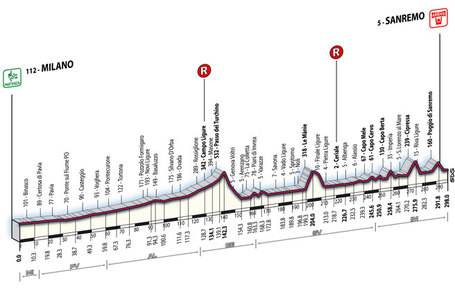 It hardly seems right to begin a description of a bike race through Italy with a course profile. How soul-less, how monochromatic. It hardly does justice to the beauty and emotion of Italian racing. And Milano-Sanremo, as it wends its way down the coast is truly a beautiful race worthy of its title, La Classicissima.

To the Passo del Turchino

The race begins in Milano, and sets off South across the plains of Lombardia. After 100 kilometers, in the neighborhood of Campo Ligure, the terrain begins a steady climb upward to the Passo del Turchino. These days, the Turchino does not do much to decide the race, but the tunnel-topped climb still retains its hold on the imagination, a transition from the dark night of winter to the bright daylight of spring.

In 1946, Fausto Coppi launched his race-winning move from the Turchino, overtaking Frenchman Lucien Teisseire on the slopes of the climb. Here is what Claude Tillet of l'Équipe wrote that day:

The Turchino tunnel was of modest dimensions, just 50 metres long, but on 19th March 1946 it assumed exceptional proportions in the eyes of the world. That day it was six years in length and lost in the gloom of the war...A rumbling was heard from the depths of those six years and suddenly there appeared in the light of day an olive-greenish car stirring up a cloud of dust.

'Arriva Coppi' , the messenger announced, a revelation only the initiated had forseen. Coppi arrived very quickly as it turned out. — Veloarchive.com.

After 147 kilometers alone, Coppi, who had spent the previous two years as a prisoner of war in Africa, won in Sanremo by 14 minutes ahead of Teisseire. "The people, tested by war, found again their hope," in the words of Gazzetta. To pass through the tunnel of the Turchino is to begin anew. The summit lies 156 kilometers from the finish, and gains approximately 400 meters total in elevation.

Along the Ligurian Sea

The Turchino marks the transition from the interior to the coast, and from its summit, the riders descend precipitously to begin a fast, flat 50 kilometers. The route follows the coastline Southwest along the Ligurian Sea, passing through Savona. Across the water lies Cinque Terre, which will host the potentially decisive 64 kilometer crono of this year's Centenary Giro d'Italia.

Just outside Savona comes a new climb, introduced this year, in Le Mànie. The climb is short and steep, rising approximately 300 meters in 5 kilometers. It's the kind of obstacle that leaves a sting and zaps the zing from the legs of the sprinters. Nobody's race will end at Le Mànie, but no doubt at least one of the sprinters will feel it come Sanremo. The climb comes with 94 kilometers left to ride.

After Le Mànie comes the traditional series of Capi, or small climbs, that anticipate the finale: Mele, Cervo, and Berta. The course twists, turns, rises and falls, tracing out the coastline's difficult birth in the far reaches of geological time. The last and largest of the three, the Capo Berta, rises 130 meters in approximately 5 kilometers. Coming in rapid succession and between kilometers 245 and 258, these climbs smart. Little wonder, Mario Cippolini required fourteen starts to win the Italian classic.

At last, we come near to Sanremo. If anyone has hopes of a breakaway, it must come here on either La Cipressa or il Poggio de Sanremo. The Cipressa climbs 235 meters in 5 kilometers, and the race organizers added it in 1982 to give the attackers a better chance at victory. Rarely has an escape survived from so far out, but more than one sprinter has said arrivederci to his hopes on the slopes of the Cipressa. The sprinter's teams will work to keep the pace tame, while the opportunists try their chances. Look for riders like Sebastian Langeveld or Michele Scarponi to go on the Cipressa, in the hope of keeping the pace high and softening up the bunch for their captains. From the top of the Cipressa, there remains 23 kilometers to ride to the finish.

A brief flat section follows the Cipressa, allowing the sprinters to recover - and return to the main field, should their legs have failed them on the climb. Any breakaways who have made it clear on the Cipressa generally do not survive this stretch of road. In the main field, meanwhile, the teams of the favorites fight for position at the front. On the narrow roads of the Poggio di Sanremo, it is necessary to ride at the front, and a fierce battle ensues as the kilometers tick down on the way to the climb.

The Poggio begins just 10 kilometers from the finish. The climb lasts 4 kilometers, has an average gradient of 3.7%, and tops out at 160 meters in elevation. Tight curves define the climb and tempt the attackers. From the summit, there remains just 7 kilometers to ride to the finish. Such a tease, La Primavera. The road swoops vertiginously down through a series of hairpin turns. The landscape blurs, sky and sea become one. A rider who wins on the escape climbs well and descends better. At the base of the Poggio di Sanremo, just three kilometers remain.

The finish follows last year's course, arriving at the piazzale Carlo Dapporto, rather than the traditional Via Roma. Road construction explains the change, as I recall. From the base of the Poggio, the course follows the Lungomare Italo Calvino, named after Italian novelist Italo Calvino. For a brain twister, pick up If on a Winter's Night a Traveller. The course runs straight, then dives into a series of corners. A slight rise greets the riders as they sprint for the finish at piazzale Carlo Dapporto. Just one sweeping left turn slowed the charge of the sprinters down the Via Roma. This time, the course serpentines through the final 2 kilometers, and there's a slight climb to the line. The stronger sprinters won't notice the climb, but the additional corners may offer one last chance for an escape to succeed.

Last year, Fabian Cancellara attacked with 2 kilometers to ride and held off an elite chase group. The main field failed in the finale to catch the chase group. Despite Cancellara's absence, the possibility for a small group finish remains alive. But perhaps this time, the sprinters will have their day.