It's a bike race. And it's in Italy. And it's named after famous dead guys. Could this be any better? I'm not sure how.

The Settimana Coppi-Bartali runs five days, which isn't really a week, but who's counting? Not me, since I don't do counting. It has six stages total, which, for those of you who are counting, means that one day has two stages.

The race unfolds in the Emilia-Romagna region, which lies in the Northeast portion of Italy. The Po river traces out the Northern boundary of Emilia-Romagna, and the region is dominated by the flat plain of the river basin. Grapes grow there. The Appenine mountains cross from north to southeast for variety. Because variety is good. A rugged coastline meets the Adriatic.

More info., and a must-see chart, below the fold. 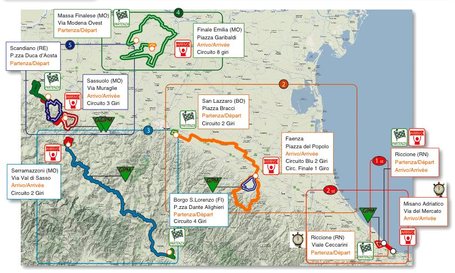 Click to see it in all its full-size glory. Truly, this thing is a work of art that completely obscures the information it intends to convey. I could not have done better if I tried.

Right, because that certainly cleared things up. Allow me to assist. The Settimana is not an especially difficult stage race. Most riders are using it to train for the Ardennes or other objectives later in the year. There is assorted climbing, but nothing especially severe. The only crono is a team crono on the opening day. It's flat.

The race begins with a double day. Stage 1a is a circuit race in Riccione. The circuit covers 8.9 kilometers, and involves climbing. The one climb ascends 600 meters with an average gradient of 9 percent. For 200 meters, the climb tilts up to 12 percent. L'ouch. The finish is flat. It should be for the sprinters, Alessandro Petacchi or Francesco Chicchi might make a result here. The stage is likely too short for the climbers to get too far up the road. Total distance, 81.2 kilometers.

Stage 1b is a 14 km, mostly flat, team time trial, running from Riccione to Missano Adriatico. Team Columbia-High Road (they're reportedly bringing Michael Rogers to this race) and Saxo Bank (who love them some cronos) are teams to watch here.

Stage 2. San Lazzaro di Savena to Faenza. 182km. The course is flat, then the riders enter a 26.4 kilometer circuit, which they ride twice. It has a climb, Monte Carla, though not a huge one. Then, they exit the circuit, and climb the Monte Trebbio, which tops out at 500 meters. The stage has a downhill finish. The race info claims that it is not technical and has good pavement. Mountain points are on offer the first time up the Monte Carla and on the Monte Trebbio. A good chance for GC riders to have a go.

Stage 3. Borgo S.Lorenzo to Serramazzoni. 163.4 km. This stage is a lumpy, bumpy affair. The stage begins with a circuit. So many circuits, this race. Then, there is a climb, Passo della Futa, which is 8 km long and 900 meters tall. Someone else can calculate the average gradient, since the race organizers declined to do it for me. Then follows two more climbs, Castiglione dei Pepoli at 800 meters and Passo dello Zanchetto at 960 meters. A smaller bump offers mountain points, the Montese at 842 meters. The final 40 kilometers climb to yet another circuit. The finish has a short climb of the sort favored by Giro organizers and hated by pure sprinters. A typical day of Italian racing. This stage should serve to open up the GC battle.

Stage 4. Massa Finalese to Finnale Emilia. 162.8 kilometers. Circuit-o-rama. This thingy is flat, flat, flat. They do eight laps on a flat circuit in Finale Emilia. I feel dizzy already. If the sprinters can't win here, they can't win anywhere. Alessandro Petacchi and Francesco Chicchi have reportedly r.s.v.p'd, or whatever one does in Italia. Stage 4 is their day for podium kisses.

Stage 5. Scandiano to Sassuolo. 178.5 kilometers. This stage consists of two circuits. Kid you not. It begins with three trips up a 300 meter climb, and ends with a different 300 meter climb. The climb on the second circuit is steeper. The profile looks like a row of teeth in need of an orthodontist's attention. The finish is flat, following a descent.

Last year, Cadel Evans won the overall at this race. He will ride again this year, as he continues his slow build to the Tour. Last seen driving the tempo on the Cipressa, Michele Scarponi will take the start at the Settimana. He won this race in 2007. Damiano Cunego is fresh off altitude training in Tenerife and is honing his form for the Ardennes. He might not win, but he'll want to ride hard. Danilo Diluca, former Giro d'Italia winner, should also do well here. Over at ISD, Dario Cioni and former Italian National Champion Giovanni Visconti will share team leadership. Saxo Bank is bringing 2007 Worlds runner-up Alexandr Kolobnev.

In the sprints, Alessandro Petacchi and Francesco Chicchi will start. At ISD, young Italian sprinter Oscar Gatto would dearly like a result, and could get one here. Also, watch for Enrico Rossi of Ceramica Flaminia-Bossini Docce, Yuri Metlushenko of Amore & Vita-McDonald's, and Danilo Napolitano in the final kilometer hijinx.

Official race site
Course Info (pdf)
Cyclingfans. No video information has so far appeared. If you find it, post it up.