Bummer news of the week (IMHO) comes from a predictable source -- ASO -- who have left Team LPR off the invite list for the Ardennes classics La Fleche Wallonne and Liege-Bastogne-Liege. This officially shuts Danilo Di Luca out of the scene, despite winning all three races over a three-year period back in his Liquigas days. So far LPR doesn't make the cut at Amstel Gold either.

Very little has been said about why, or whether this is the last word. Recall, LPR were left off the wildcard list back in February, for slightly unclear reasons. The official standards have to do with "sporting, legal, administrative and ethical" matters, and there was much speculation that LPR simply had not paid into the UCI Biological Passport Program, though their manager insists they had. That leaves sporting, legal and administrative problems as the remaining possible culprits. Hopefully there will be more discussion of this, but I am skeptical that there will.

Danilo Di Luca, il Killer di Spoltore, is a longtime personal favorite rider. His birthplace in Abruzzo is near my ancestors' turf, and the history of famous Abruzzese in the peloton is pretty short. There is Di Luca, and there is Vito 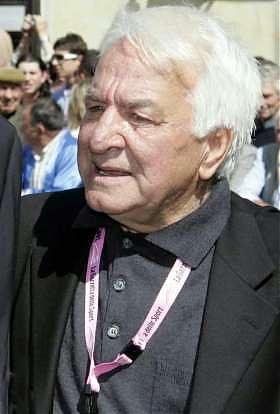 Taccone, il Camoscio d'Abruzzo -- the Abruzzo chamois (pictured). Taccone was a local legend, something of a similar rider to Di Luca in terms of his punchy classics-level climbing prowess, and famous around southern Italy for making the grade in yet another northern-dominated sport. Taccone won the 1961 Giro di Lombardia and a fistful of Giro stages, though his association with the maglia rosa was brief. Taccone anointed Di Luca his cycling legacy heir, which seemed like a good idea when the latter was winning the kinds of races that had once suited the former. Unfortunately, Taccone's other legacy was a temperamental behavior in races and a conviction shortly before his death last year for selling counterfiet clothes. There is a subtle consistency to being a mezzogiornese interloper, a troublemaker in races, and a scofflaw in real life, though there's something to be said for the rule of law, at least outside Abruzzo. Anyway, nicknaming him after a goat native to the Gran Sasso d'Italia sounds about right.

Di Luca's career seems to be tailing off in a similar way. The Killer hit his stride at age 28 with a Pro Tour overall title in 2005, buttressed by wins at Amstel, La Fleche, and Pais Vasco, followed by an even more spectacular season in 2007 highlighted by his only Monument (LBL) and grand tour (the Giro, natch) wins. From then, his shady association with Carlo Santuccione cost him a few months off the bike, his job at Liquigas, and now his ability to get invited to races he once won. Presumably Di Luca will find a more legitimate way to get on with life than his cycling forebear, but his career seems to be grinding to a slow, bitter halt.

Alas, there is still the Giro. One of the coolest things I saw all last season was the three-man attack LPR executed on Monte Pora in stage 19 of the Giro, when Di Luca and Paolo Savoldelli escaped on the descent of the Passo del Vivione and joined teammate Giario Ermeti, who was up the road in a break. Di Luca took second behind break survivor Vasil Kiryienka, and paid for the effort the next day when he dropped 4' to the maglia rosa group over the Gavia and Mortirolo. But as tactical displays go, that was magnifico. Di Luca will likely feature at a few more Giri: d'Italia and di Lombardia. He might even get an invite to the Italian worlds team, though I'd be mildly surprised. But Di Luca is a "killer" in the sense of a guy who finishes off his rivals, a la Cunego or Valverde, whose closing speed is matched only by his tenacity (watch him claw his way to victory in Liege '07). Hopefully we will get a few more chances to see him at his best.