Share All sharing options for: Preview: Vuelta a Murcia 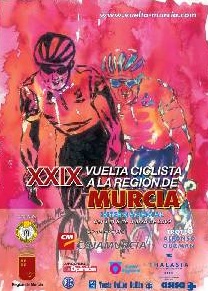 What is it? the 29th Vuelta Ciclista a la region de Murcia.

Any video? Hmmm. My guess is yes, but where is the question. No it's not on CTV so we don't have to go through that exercise again. Cyclingfans had a mention of it the other day but it seems to be gone. I don't read Spanish so there might be a linky on the race homepage that's staring me in the face. I'm sure one of you can find video on the interwebs; if so put it in the comments and I'll edit this blurb.

Background info? Murcia is a region of Spain, Alejandro Valverde's home region in fact, and like every other region it hosts a stage race. Maybe I should say, it STILL hosts a stage race because with this recession/depression hitting us, and hitting Spain and Portugal especially hard, several regional races have been cancelled. In the winter we heard that Valenciana was cancelled. The other day, Aragon. Word is Catalunya is on life support, needing a cash infusion from the regional government, something that Aragon tried to get but didn't.  The Euskal Bizikleta is surviving with help from the Pais Vasco folks. Since various economists are predicting that the economy is in a L shape, meaning that after the fall it will stay flat and at that low level for at least a year, there's a good chance that other Spanish regional races will fall by the wayside as well. Will they pop back after the economy recovers? Who knows? In the meantime, let's cherish the races we have.

What's the course like? Five stages: Stages one and five (two cat. 3 hills) and probably two will wind up with bunch sprints. Stage four, with two category one mountains,  will weed out the sprinters for the GC. Stage three is a rolling 16.3km ITT course which will decide the winner. In summary: A nice hilly course.

Who's favored for the GC? Interesting question. Climby/chrono combo guys. We have three, possibly four chronomen who can navigate some hills: Cancellara, Zabriskie, Grabsch, and Clement. Where Z-man's head is at after his burglary, I haven't the faintest. Then you have some climby guys who aren't too shabby against the clock either: Menchov, Astarloza, Danielson, and Garzelli. Finally you have some goats who struggle against the clock but might animate this race as a result: Zeke Mosquera, Siutsou, "Big Bird" Bauke Mollema, Anton, Van Goolen, and Jason McCartney.

Who's won in the past? Last year's final GC is here. Valverde won this the past two years and three of the past five. Pantani won in 99. Del gado won the 1st edition.

You mentioned sprinters? Yeah I did. I'm talking about Graeme Brown, JJ Haedo, Henderson: guys like that .

VDS implications? This is a category 5 race, a lower profile race, particularly when you see that it overlaps with Paris-Nice and Round One of the Saxo-Astana Battle For World Stage Racing Supremacy. (California was just a skirmish.) Still Murcia is a place where certain riders can pick up some useful points for their owners. If you got any Spanish regional riders, or one and two pointers or even one of the couple of expensive guys racing this race is important. Remember the scoring is just the final GC and stage top three placings. No lesser jersey prizes.

Anything else we need to know? Couple of things.

- With Valverde skipping the race (he said he would well before CONI came knocking) to concentrate on the Tour de France (yeah, that doesn't quite make sense to me either) and Astana not returning, only two of last year's top ten riders are back: Stefano Garzelli, who finished 2nd, and Zeke Mosquera, who finished 10th. That fact along with the early season date will make it interesting to see how the peloton sorts itself out. Will Garzelli command/order the race? How's Anton recovering from his Vuelta a Espana injury? Is Menchov ready to go? Can Garmin get a win? Will there be lots of dangerous attacks? Could be fun to see this race unfold.

- Again, without Valverde here, Caisse d'Epargne has got what is to me a curious lineup. To me this is a good race for one of their second line A-listers to be the leader. Guys like Arroyo, or Moreno, Pereiro, Lopez Garcia, or Uran, say. All along we knew Lulu Sanchez was gonna be at the overlapping Paris-Nice, but none of those other guys are here. So who's the leader? Francisco Perez Sanchez? I'm sorry, that's not an inspired choice. In fact none of these guys are particularly inspiring IMO. We'll see if someone emerges.

- Finally this race overlaps with both Monte Paschi Eroica, and with Paris-Nice, so between those races and most Northern Classics racers staying close to Belgium, there is some dilution of the field here. Still, this will give us a good look at the Iberian regional teams. Enjoy!