Perception: Filippo Pozzato is the favorite to win Sunday's Ronde van Vlaanderen. This is not merely the trendy choice; Pippo is the perfect type of rider, on the perfect form at the perfect time.

Reality: if someone pointed a gun to your head and told you to pick the winner of Flanders or else, is there any way you don't utter the words "tom boonen"?

Tommeke Boonen, the Emperor of Mol, a/k/a Beans (according to a literal translation of "boonen" or at least "bonen") is the man to beat, unless you want to focus on the last five days and otherwise forget the last five years. Boonen has dominated the Northern Classics since 2004 in a way that has threatened to deprive these races of their greatest asset: suspense. As brilliant as the sight of Tommeke, Fabian Cancellara and Alessandro Ballan rolling into the Roubaix Velodrome was last year, that race was over 25 km earlier. Boonen is not just a man for the classics; he's the ideal package of power, speed and size for the Tour of Flanders. Not exactly news. 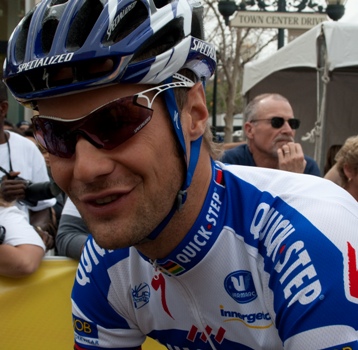 As for the matchup with Pippo, twice in their history has the Italian bested his former teammate in a race where both riders were contesting the finale of a one-day race: this past Saturday, and in the 2007 edition of Het Volk, where Boonen ran third behind Pippo and Juan Flecha. The pair have met dozens of times since that Het Volk, from which time they were no longer teammates or kids, but rarely have they truly knocked heads. If Boonen is winning a sprint in the Vuelta, Pippo is usually sitting it out, or vice versa. So there is not much evidence which says that Boonen is a good bet to beat Pippo if they are the last two men standing again Sunday.

There are, however, years of evidence which says that you don't want to bet against Boonen at the end of a Classic. No, he doesn't usually win: we have seen him outkicked by the odd pure sprinter (Cavendish), and more often we've seen him coast over the line after missing the break or sending a teammate away to victory. Typical: his 17th place in de Ronde last year was his worst placing since 2004, but had everything to do with the fact that Stijn Devolder was already greeting the royal family by the time Tom and the rest of the chasers rolled in.

By my count, since 2004 Boonen has meaningfully contested 28 Classics races (excluding Milano-Sanremo, focusing only on Belgian events). His record consists of thirteen wins, eight losses, and seven events where he allowed or otherwise had a teammate up the road (six of which Quick Step won). That's a record of 19 team wins, 8 losses by Tom, one other team loss. Of those eight losses, only twice was he simply outkicked at the line or in the final km. Take a guess who the winner was, both times.

Nineteen wins in the northern classics. Four monument victories in his last eight starts. A steady display of power all spring that shows he hasn't lost his most crucial asset. If you don't like dealing with him in the last km, well, good luck getting rid of him -- unless you're content to break away with Devolder and Chavanel on your wheel. The future is far from settled, and Pozzato poses as credible a threat to Boonen in the Tour of Flanders as we have seen in years, but it's a little much to say that Beans is not even the favorite.