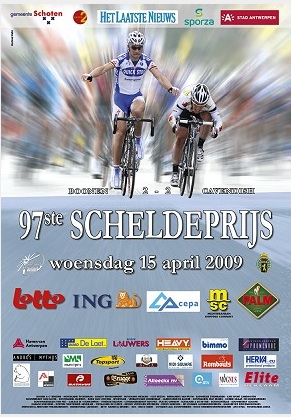 So a pause before we throw ourselves at those nasty Ardennes races. A nice flat course made for a bunch sprint. Oh there will be the usual breaks but they'll get gobbled up as sure as Cadel Evans will soon wonder why again  \o/ is on his Tour team.  Again. BTW I love that the poster here has last year's finish even if Cav ain't racing. Maybe Greg Henderson can put on a Cavendish mask at the last minute.  So first things first. Cycling Fans and Steephill.TV both have links to the various feeds. The race is on CTV, Sporza, and other places in all probability including that Justin guy. Race itself is slated to start at 6:15 Eastern, 12:15 CET, but the video feeds should commence three hours later.

So who do you like? Some Belgian by the name of Tom Boonen is supposed to start. I think he's won some races before. Then you got Robbie McEwen, who's been looking sprightly this spring, finishing twice to Cav at that de Panne race. His Teammate, Unibrow Danilo Napolitano is also racing AND Gert Steegmans. In fact Katusha looks extremely serious here. Dehaes. Brutt. Trussov.

Who else? The LPR train of Alessandro Petacchi is in town to contest. Nice. Cervelo is also here with three of their four H's- no Hushovd but Haussler is here. Gerald Ciolek is supposedly feeling better.. could be interesting. Saxo is led by JJ Haedo. Rabobank has Wild Man Browne. Lotto- Van Avermaet. Columbia- Henderson, who I'll say is also a pleasant surprise this year. They have Kim Kirchen doing some last minute training too. Be sure and wave to him when he goes by the camera!

There's 23 teams in all but all eyes will be first looking at Boonen and Quickstep (unless Boonen pulls for Alan Davis). Can he win his third?